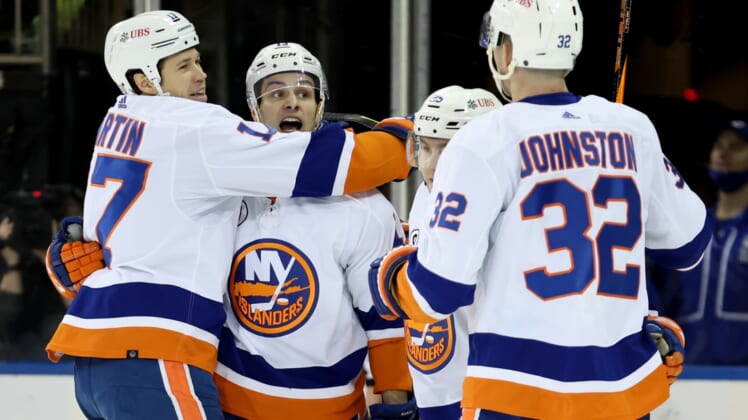 Mathew Barzal collected a goal and an assist, Seymon Varlamov made 27 saves and the visiting New York Islanders scored early in each period in a 3-0 victory over the New York Rangers Friday night.

Barzal scored for the second straight after going without a goal in 15 straight games. His 14th goal of the season 2:47 into the third also marked his 300th career point.

Barzal helped the Islanders (31-27-9, 71 points) beat the Rangers for the second time in two weeks and get their third straight win overall.

Varlamov made seven saves in the first period, 12 in the second and eight in the third. He recorded his second shutout of the season and 36th of his career.

Casey Cizikas and Matt Martin also scored for the Islanders, who improved to 11-4-1 in their past 16 games.

Igor Shesterkin finished with 15 saves as the Rangers (44-20-5, 93 points) saw a four-game winning streak halted and dropped to 8-3-0 in their past 11 games. New York also remained five points behind the first-place Carolina Hurricanes in the Metropolitan Division and one ahead of the third-place Pittsburgh Penguins

Cizikas opened the scoring 2:40 into the game by converting an easy tap-in from the right side of the crease. He got his ninth goal after getting a cross-ice pass from defenseman Ryan Pulock, who intercepted an errant clearing attempt by Rangers forward Alexis Lafreniere.

After getting five shots on goal in the opening 20 minutes, the Islanders struck again 4:48 into the second when Martin finished off a 3-on-2 with Barzal.

After Adam Pelech poked the puck away from Rangers defenseman Jacob Trouba in the defensive zone, Ross Johnston sped through the neutral zone and found Barzal, who slid the puck across the slot for Martin, who lifted a wrist shot from the right circle over Shesterkin’s stick.

Barzal got his milestone by lifting a backhander from close range over Shesterkin after getting a cross-ice pass from Oliver Wahlstrom, who gained possession shortly after New York defenseman Braden Schneider fell down and lost the puck in the neutral zone.