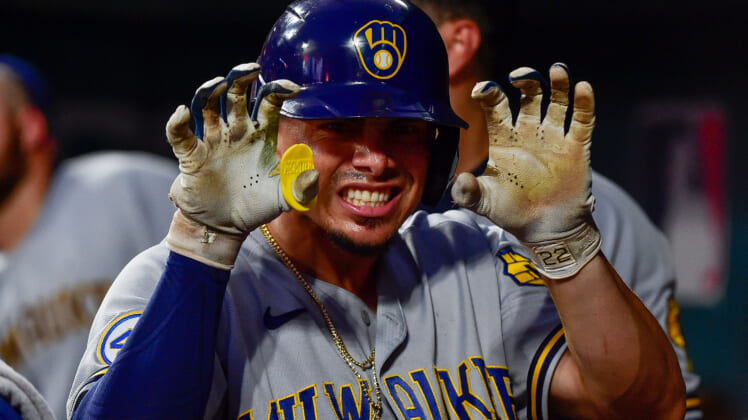 One of the first impactful trades of the 2021 MLB season saw the Tampa Bay Rays send shortstop Willy Adames to the Milwaukee Brewers in late-May. The deal sent Adames and right-hander Trevor Richards to Milwaukee for relievers J.P. Feyereisen and Drew Rasmussen.

This was a trade made to help both teams in the immediate future. It has done precisely as much. Here’s how the Brewers and Rays are each winning the four-player swap.

Willy Adames is an indispensable part of the Milwaukee Brewers

Adames was struggling mightily at the plate when the Brewers acquired him. Since landing in Milwaukee, he has put together the best baseball of his four-year MLB career.

While the Brewers are a legitimate contender for the National League pennant, their offense has been severely lagging this season. One of the individuals keeping that unit upright, though, is Adames. He’s slugging at an elite level, limiting strikeouts (punch outs have been a chronic issue for the shortstop) and has been quite possibly their best position player in 2021 as a whole.

Ironically, some of the newer faces like Adames, Eduardo Escobar and Kolten Wong have been the driving forces of manager Craig Counsell’s offense. Without those individuals, this could be the league’s least productive offense.

Another appealing aspect of Adames’ resume for the Brewers is his playoff experience, as he was the Rays’ starting shortstop when they appeared in the playoffs in both 2019 and 2020. Having players with postseason resumes on a team that’s looking to break through in the National League comes in handy.

The Brewers later moved Richards and Bowden Francis to the Toronto Blue Jays for first baseman/designated hitter Rowdy Tellez, who has since become their answer at the corner infield position.

The Brewers have their long-term shortstop in Willy Adames and a power threat from the left side in Tellez.

Feyereisen and Rasmussen have been everything that manager Kevin Cash could’ve asked for. Both right-handed hurlers are having the best season of their young MLB careers serving as fixtures on the team’s pitching staff.

Feyereisen has been efficient coming out of the bullpen as a one-inning reliever. He’s inducing both weak contact and strikeouts with his slider and changeup. Rasmussen has found success in multiple roles including as a starter, sporting a 3.00 ERA with the Rays.

Their arrivals have aided the Rays’ pitching staff by adding a pair of reliable relievers, as well as two more arms to fill the voids created by the overwhelming amount of injuries on the team’s pitching staff.

That list includes the team’s ace, fellow starting pitchers and a bevy of high-level relievers. Yet, the Rays own the best record in the American League (87-51). That’s a result of internal development and their midseason swap.

The Rays trading Adames was done with two intentions: 1) improving the bullpen and 2) paving the way for Wander Franco to become the everyday shortstop. Franco, who was one of the top prospects in MLB, has been the Rays’ primary shortstop since the Adames trade and impressed in the role.

Franco is putting the ball in play at a high level, crushing balls in the gap and proving he’s an MLB hitter. Defensively, he has 3 DRS at shortstop and has also made seven starts at third base. All in all, he has been just as effective as Adames with the upside and time to become one of the best middle infielders in the sport.

The Rays, like the Brewers, are a team that’s heavily reliant on its pitching staff with a lacking offense but one that has the upside to play better given its array of capable hitters; Tampa Bay has the likes of Austin Meadows, Brandon Lowe, Randy Arozarena, Joey Wendle and others present.

All the while, if Franco continues to hit the ball well and get on base, he could add a new dimension to their offense in the team’s quest to return to the World Series. By the way, the youngster has a 36-game on-base streak.

The Brewers got an infield upgrade in a player who’s blossoming into a force to be reckoned with while also upgrading at first base. Meanwhile, the Rays beefed up an aspect of their team that needed reinforcements while getting their top prospect up to the big leagues. This trade has been a win-win.