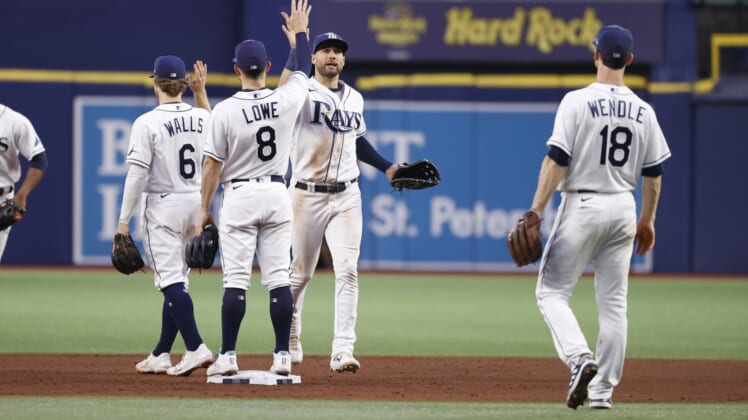 After going 0-2 with an 8.49 ERA in five August starts, Wacha (3-4) surrendered solo homers to Jorge Polanco and Ryan Jeffers, plus a double to Max Kepler, over his six innings.

The right-hander struck out seven with no walks and won for the first time since July 7 in an 8-1 victory over the Cleveland Indians.

Austin Meadows notched two of the six hits for the Rays (85-50), who are 39-14 against clubs with losing records.

After reaching base Thursday in his 33rd straight game via a walk, rookie shortstop Wander Franco was out of the lineup after exiting with a headache the night before.

Sidelined since June 19 with a right middle finger strain, Minnesota starter Randy Dobnak (1-7) pitched seven innings and allowed five runs on six hits in his first outing ever against the Rays.

The second baseman put the visitors up in the first inning when he deposited a 95 mph fastball up in the zone from Wacha into the stands in right-center for his 25th homer.

After their highly potent offense scored just twice in two straight losses to Boston, the Rays’ offense perked up and sent three home in the second.

Then Arozarena scored as Kevin Kiermaier dashed around for a stand-up triple on a liner to right-center. Kiermaier scored to make it 3-1 on Yandy Diaz’s groundout.

In the next frame, Nelson Cruz and Meadows recorded RBIs as the Rays racked up all six of their hits over the two innings and led 5-1.

Jeffers popped his 12th homer in the fifth to make it 5-2, but Wacha completed his night with a perfect sixth inning.

Polanco produced a two-out RBI double off David Robertson in the eighth, but the reliever retired potential tying run Josh Donaldson on a grounder to second to end a 10-pitch at-bat.

Andrew Kittredge preserved the win for his sixth save with a scoreless ninth, fanning possible tying runner Jeffers with a runner on first.