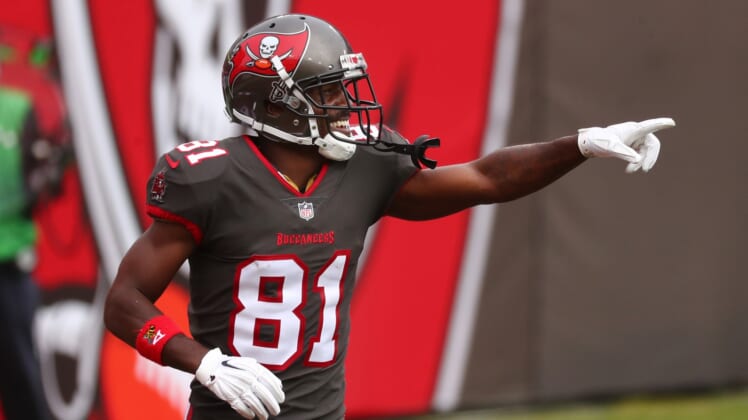 Seattle Seahawks quarterback Russell Wilson hasn’t been afraid to call out the organization this season. Now, amid circulating trade rumors, Wilson might be offering Seattle a chance to mend fences with their franchise quarterback.

Wilson, who has never won an NFL MVP award, wants to take the next step in his incredible career. But, the 32-year-old’s vision for the offense has clashed with head coach Pete Carroll. But even as the drama between the two sides intensifies, Wilson still believes he will be in Seattle next season.

For their part, the Seahawks have made a few moves to help their star. Seattle traded for Gabe Jackson to strengthen the offensive line and signed tight end Gerald Everett. It seems Wilson is looking for something more, a move that he has been begging the team to make for years.

During an appearance on 93.7 The Fan, NFL insider John Clayton said Wilson is lobbying the Seahawks to sign Antonio Brown. It’s far from the first time Seattle has heard this request.

Wilson asked the team to acquire Brown in 2019 and the team showed slight interest, but opted to signed Josh Gordon. When Brown become available last season, Wilson again went to the organization and made his case for adding the former All-Pro wide receiver.

Brown is once again a free agent and it seems Wilson is hoping the third time is the charm.

After serving an eight-game suspension last season, Brown took the field for the Tampa Bay Buccaneers. The move happened after Tom Brady encouraged the organization to take a chance, even offering to be roommates with Brown. Everything worked out, leading to a Super Bowl LV celebration.

Brown stayed relatively quiet with the Buccaneers, accepting his role as the team’s No. 3 wide receiver. He finished the regular season with 45 receptions, 483 receiving yards and four touchdowns in eight games. During Tampa Bay’s run to hoisting the Lombardi Trophy, Brown caught eight passes for 81 yards and two touchdowns.

Related: Seattle Seahawks will trade Russell Wilson in 2021 under this scenario

Brown would arguably give Seattle the best trio of wide receivers in the NFL. But adding him would also signal a greater commitment to the passing attack, something Carroll is against.

If history is any sign of what’s going to happen, the Seahawks won’t sign Brown. If that happens, there’s no telling how Wilson will react to the organization rejecting his idea for the third consecutive year.