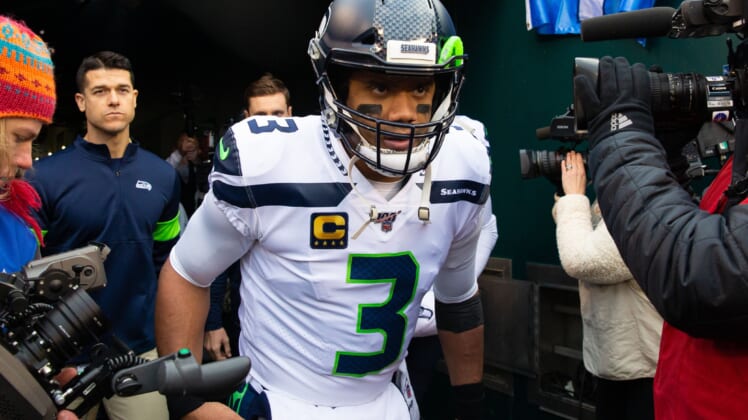 The Chicago Bears struck out on a Russell Wilson trade and instead signed quarterback Andy Dalton in free agency.

Now that the deal has been called off, though, rumors have surfaced about what exactly Bears general manager Ryan Pace offered to try to acquire the Seattle Seahawks superstar.

Dan Patrick was on his radio show and read on air, seemingly from a message on his phone, what Chicago’s best trade proposition was for Russell Wilson, per NFL reporter Dov Kleiman:

As Patrick stated, he doesn’t know which two starters the Bears included in their package for Wilson.

Here’s what we proposed about a week ago, which yours truly converted to Twitter form:

It’s essentially what Pace offered, but instead, we had the meager third-round pick Pace kicked replaced with two of Chicago’s second-round picks.

In other words, Pace was pretty close, yet he wasn’t willing to go quite far enough to acquire Wilson’s services.

All those hypothetical maneuvers we came up with, by the way, fit in under the NFL’s stricter salary cap for 2021. The Bears would’ve had to part ways with costlier starters like Akiem Hicks and Kyle Fuller if they wanted to get Wilson, and needed to make Seahawks GM John Schneider an offer he couldn’t refuse.

Either the starting players weren’t of high enough quality, or Schneider wasn’t impressed enough with the draft compensation, to pull off the deal. There was an extra mile to go that Pace wasn’t willing to hustle for. It’ll wind up costing him his job, barring a miracle or an improved offer for Wilson down the line.

When Pace could’ve just gone a little bit further and been hailed as a hero, instead his legacy will continue to be defined by passing on Patrick Mahomes and Deshaun Watson in favor of Mitchell Trubisky in the 2017 NFL Draft. It’s even worse after Pace failed to secure Wilson and instead went for Dalton.

Nothing against the Red Rifle, but Dalton is going to catch all kinds of grief in the Windy City as he inevitably proceeds to have a worse season than Wilson ever would.

As for the Seahawks, what is the upside to keeping Wilson at this point?

Yes, he’s a top-five quarterback, yet he doesn’t really want to be there. Head coach Pete Carroll has orchestrated rebuilding jobs before, and despite his advanced age now, he could pull it off again relatively quickly with the haul Seattle could’ve gotten for its signal-caller.

The Seahawks should dangle Wilson and squeeze a suitor into a blockbuster trade for even more than he’s worth, like they could’ve in our proposal.

Oh well. We’re left with two disgruntled franchises who aren’t truly settled at the most important position on the field. Hopefully the two sides agree to renegotiate at some point, because Russell Wilson deserves to fully thrive without a conservative coaching staff holding him back.