One of the greatest quarterbacks in San Francisco 49ers history thinks former starter Jimmy Garoppolo should be quite concerned that teams around the NFL did not make a harder push to trade for him in the offseason.

While trades for superstar quarterbacks Russell Wilson and Deshaun Watson got the lions share of the movement headlines this offseason, the future of 49ers veteran Jimmy Garoppolo was one of the more consistent stories this summer. Once the Cleveland Browns traded Baker Mayfield, many thought it was only a matter of time before “Jimmy G” would find a new home for 2022.

Of course, offseason shoulder surgery slowed the market a bit, but for a player that is 33-14 as a starter and just went to the NFC championship game last season, finding an interested team should be easy work. Yet, the weeks passed and Garoppolo remained on the 49ers roster despite the fact that the organization had completely transitioned to the Trey Lance era at QB. However, instead of giving him up for free, the 49ers and Garoppolo surprisingly agreed to continue their relationship and “Jimmy G” accepted a role as the backup to a second year player.

That fact is something that rubs 49ers icon Steve Young the wrong way. The idea that in a league where QB is the most important position and many teams lack a competent player in the spot, that no team was willing to give up some value for a winning player is not just shocking but should be “alarming” to the 30-year-old.

The one-time Super Bowl winner believes Garopollo should actually do his due diligence and find out why teams passed on making a trade for him. Even if it means investing 100 grand to get tested by Bain Company, he needs to understand and fix the reputation he has developed around the NFL. 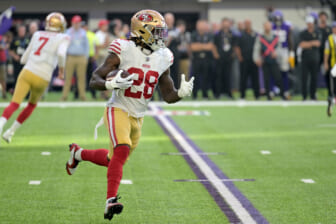 The San Francisco 49ers begin their 2022 regular season schedule on Sept. 11 with a 1 PM ET matchup on the road versus the Chicago Bears.