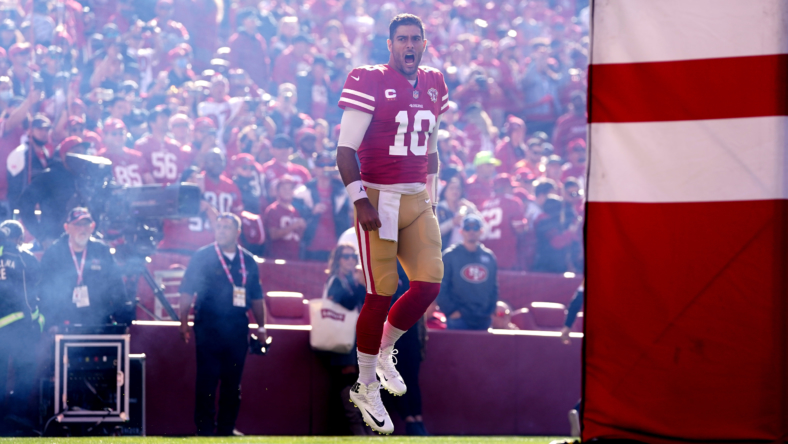 By the end of Monday night in Mexico City, the San Francisco 49ers could be in first place in the NFC West. The Arizona Cardinals could also find themselves just one game out in the win column in the division.

This is a pretty huge divisional game between two teams that are seemingly going in different directions. San Francisco has won two consecutive games and seems destined for a run in the second half of the season. Arizona is an underperforming and injury-plagued team.

That’s the narrative. But we also have to throw some of this out when San Francisco and Arizona go up against one another. The Cards swept their counterparts a season ago and have historically played the 49ers well. Meanwhile, San Francisco has been about as inconsistent as any legitmate contender around the league.

In the final International Series game of the season on ESPN Monday night, the football world will be paying attention to this one. Below, we provide you with three bold predictions.

There’s this train of thought out there suggesting that Garoppolo is somehow a weak link for the 49ers. While that might have been the case in the past, the embattled veteran has performed at a much higher level than most anticipated after he replaced an injured Trey Lance back in Week 2.

Since San Francisco brought in Christian McCaffrey ahead of Week 7, Garoppolo is completing north of 72% of his passes while putting up five touchdowns and just one interception in three starts. He’s posted a 108.5 QB rating during that span. Overall, he’s been better than expected this season.

Garoppolo is set to take on a Cardinals defense that is yielding the 10th-most passing yards in the NFL to go with 17 touchdowns this season. For his part, Garoppolo has 13 touchdowns compared to three interceptions in five career starts against the Cardinals.

Even without Kyler Murray in this one, the expectation is that Hopkins will be targeted early and often by veteran Colt McCoy. If that is indeed the case, we’re expecting Hopkins to do his thing against a stout 49ers defense. In four games since returning from suspension, Hopkins has caught 36 passes for 396 yards while hauling in north of 78% of his targets.

Hopkins’ success against the 49ers since joining Arizona is also well known. He put up 85 yards and a touchdown in the receiver’s only meeting with San Francisco last season. Back in 2020, Hopkins hauled in 22 receptions for 199 yards in two games against the 49ers.

What makes this bold is the fact that Hopkins will be tasked with going up against a Pro Bowl-caliber cornerback in that of Charvarius Ward who is giving up less than 32 receiving yards per game on the season. San Francisco has been elite against the pass. But its defense also trends in the direction of letting one receiver do his thing while shutting down everything else. With an expected high target share in this one, Hopkins should put up another big outing.

When looking at divisional matchups, one must check in on the recent history. Under Kliff Kingsbury, the Arizona Cardinals boast a 3-3 record against the Kyle Shanahan-led 49ers. They swept San Francisco a season ago and have won three of the past four in this series.

Typically, this would lead us in the direction of Arizona winning the game or at least covering the massive 9.5-point spread. But given how things are playing out right now, that seems pretty far-fetched.

Arizona is without quarterback Kyler Murray, left tackle D.J. Humphries, tight end Zach Ertz and wide receiver Marquise Brown in this one. That’s a whole lot of firepower against a No. 1 ranked 49ers defense. In fact, San Francisco is giving up 20 fewer yards per game than the second-ranked unit in the league.

On the other side of the ball, these 49ers are averaging 400 total yards in the three games since acquiring All-Pro running back Christian McCaffrey. Despite some red-zone struggles, we’re expecting this team to move the ball against Arizona’s defense. In the process, San Francisco earns its fifth double-digit win of the season.