San Diego Padres’ 2021 demise is befuddling to no end 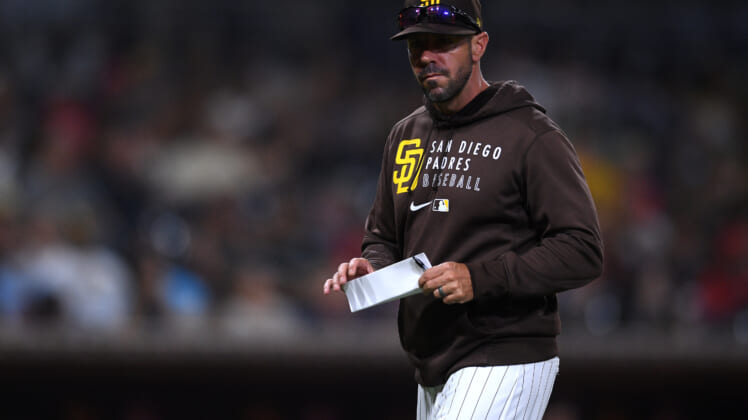 The San Diego Padres entered Tuesday with a .500 record. Yes, the team that pulled off a mammoth offseason and had a team with All-Stars across the board entered the day 78-78, eliminated from playoff contention. Say what?

The 2021 MLB season began slowly but gradually picked up steam for the Padres. As the weather got warmer, they were in the thick of playoff contention, which is precisely where they were supposed to be. Heck, they were buyers at the MLB trade deadline, most notably making a bold move for Pittsburgh Pirates infielder Adam Frazier, one of the better pure hitters in the sport at the moment.

San Diego was a playoff team in 2020 and 55-40 in mid-July. The team’s downfall and postseason shortcoming are befuddling to no end. The Padres had everything needed to go on a deep playoff run.

It’s extremely difficult for a manager to ask for much more than Jayce Tingler had at his disposal this season. His offense literally had everything: stars, power, contact hitters, stellar fielders, versatility and a balance of veterans and youth.

Fernando Tatis Jr. had an MVP-caliber season. Manny Machado was his typical, highly productive self. Jake Cronenworth looked like the Padres’ second baseman of the future. Outfielders Wil Myers, Tommy Pham and Trent Grisham were respectable near-everyday players who provided some power.

How is it possible for this collective unit to be a middle-of-the-pack offense for an entire season? There are few, if any players on the decline, many of which have smooth swings and don’t strike out at a high clip. In the case of Tatis, Cronenworth and Grisham, they have only improved with age.

Frazier added another proven and composed hitter to the mix. Naturally, teams and individual players are going to have their dry spells at the plate. But San Diego had the depth for such slumps to never severely hinder its everyday operation.

A multifaceted positional core has been the Padres’ identity, but general manager A.J. Preller also constructed a starting rotation that was as formidable as its offense. Last offseason they traded for the likes of Blake Snell, Yu Darvish and Joe Musgrove. Those moves came after the Padres acquired Mike Clevinger last season, as well as them already having emerging right-handers Chris Paddack and Dinelson Lamet.

How did these individuals, many of which performed at elite levels in recent memory, fare? Well, Musgrove was phenomenal, as he put forth the best season of his MLB career highlighted by a 3.22 ERA. Everyone else? They didn’t fare quite as well.

Snell was shaky and inefficient for most of the season, putting together the worst season of his big-league career. Darvish started hot but lost steam in the summer. Paddack struggled to get his offerings across the plate and has noticeably regressed. Rookie Ryan Weathers struggled. Injuries plagued Lamet’s season once again (he missed the end of 2020 due to an elbow injury), and he was moved to the bullpen in his return to the hill.

The bullpen? It was deep with a bevy of versatile relievers. Closer Mark Melancon was an All-Star this season. Craig Stammen, Pierce Johnson and Nabil Crismatt were reliable forces. Midseason pickup Daniel Hudson is a hard-throwing right-hander. Emilio Pagan had been a lights-out reliever in the past. Lamet has been a steady force since coming out of the bullpen.

Their rotation had depth and lethal hurlers while the bullpen was deep with proven commodities. Much like their positional depth chart, there is little more the Padres could’ve asked for on their pitching staff.

Outside of the Los Angeles Dodgers, one could’ve argued that the Padres had the best and most-talented roster in MLB in spring training. Prior to their blockbuster offseason, the Padres had a roster that was gradually improving from an impact, production and win-loss standpoint.

In 2019 many fixtures came into form like Tatis and Paddack, which was happening while the Padres were making a standout signing every offseason (Hosmer in 2018 and Machado in 2019). The ensuing season they cracked the playoffs for the first time since 2006. This season should’ve been the year they made significant headway in the National League playoffs (a la getting past the NL Division Series).

They had everything required to challenge the Dodgers in the NL West, as well as the best that the American League had to offer. Instead, they have a losing record against three of their divisional rivals while the San Francisco Giants became a World Series contender. Furthermore, the Padres only went 11-8 against the Arizona Diamondbacks, who are an NL-worst 50-106.

Moving forward, the Padres have a roster that shouldn’t need more than mere fine-tuning. At the same time, that notion is based on essentially half of their roster getting back to its career tendencies. That’s a lot to ask for, but it speaks to how much this team flopped.

The 2021 MLB season goes to show why they play the games. No matter how a team looks on paper, they’re not a given to do anything. The 2021 San Diego Padres are the new epitome of that trap.