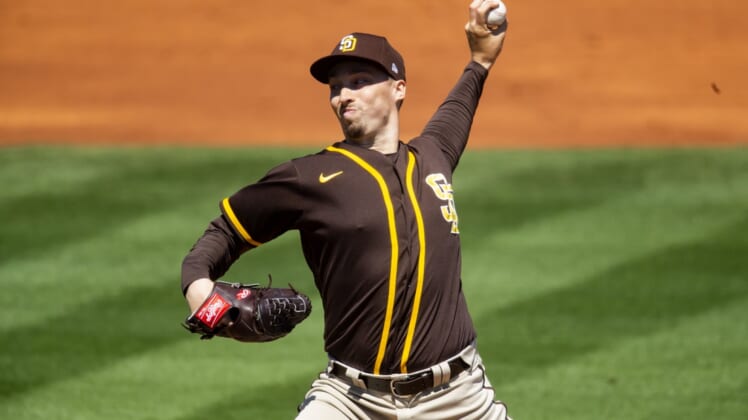 Identifying the Padres’ closer was a recurring question posed to San Diego manager Jayce Tingler throughout spring training. He deftly dodged the inquiries.

Tingler was not lacking for candidates, but he had no definitive No. 1, although he said he’d prefer to have a primary closer. Heading into the second game of the season, Friday against the visiting Arizona Diamondbacks, Tingler might be changing his mind.

Each turned in a scoreless inning as the Padres came from behind after blowing an early 6-1 lead. Pagan got the win, Melancon the save.

After the game, Tingler said the seventh inning might have been the key to the win … and that the closing role could become a semi-committee thing, particularly early in the season with the Padres playing 24 games in 25 days.

“We’ll see how it goes,” the manager said. “With the number of games early, it’s finding the guys who bounce back well and make sure they stay fresh, healthy and crisp.”

So, if the Padres keep winning, Friday’s closer could be Pagan, or Pomeranz. Then again …

“I’m sure you’ll see today’s combination some,” Tingler said. “You might see other combinations. The big decision might be what do with do in the seventh, the eighth.”

Or the fifth, if Thursday’s game is any hint of things to come. There is a question about the length the Padres have in their rotation. And they are facing that question with three key relievers — Matt Strahm, Austin Adams and Pierce Johnson — on the injured list to start the season.

Kelly, who went 3-2 with a 2.59 ERA in 2020, has won his last four starts while producing a 0.34 ERA against the Padres since returning from a stint in South Korea. However, Kelly spent the spring rehabbing from thoracic outlet surgery performed last Aug. 19.

“The way his velocity rebounded this spring was impressive,” Diamondbacks manager Torey Lovullo said of Kelly, whose fastball hit 94 mph in his first exhibition start after failing to hit 93 in any of his final five outings in 2020.

With Zac Gallen opening the season on the injured list, the Diamondbacks’ hopes for a fast start ride largely on a post-operative return to form for Kelly.

Meanwhile, Snell, who won the American League Cy Young Award in 2018 for the Tampa Bay Rays, will be making his Padres debut.

San Diego traded for Snell and Opening Day starter Yu Darvish within days of each other in the offseason. Snell was 4-2 with a 3.24 ERA with the Rays last season and made three starts for the Rays at Petco Park during the AL playoffs.

Snell’s goal is to reduce the workload facing the Padres’ bullpen.

“The No. 1 thing is to be the best,” Snell said during spring training. “I don’t want to be the guy who could have been. … I want to max out my potential. I want to go as far as I can. I want to see what is inside of me. The only way to realize that is to go deeper into games. Once I get deeper into games, I’ll become a lot better at being a complete starting pitcher.”