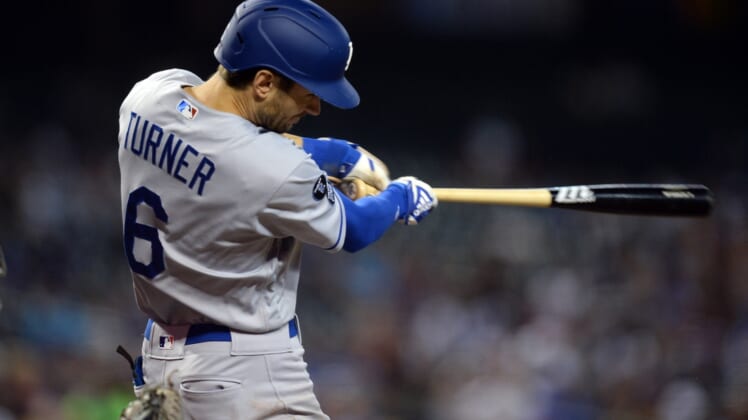 Julio Urias threw five shutout innings to lead the Los Angeles Dodgers to a 3-0 win against the Arizona Diamondbacks in the rubber game of their three-game series on Sunday afternoon at Phoenix.

Urias (19-3) allowed five hits, struck out three and walked one while increasing his major league-leading win total. He came in 9-0 with a 1.90 ERA since June 21.

Kenley Jansen pitched the ninth to earn his 36th save for the Dodgers (100-56), who remain two games behind the San Francisco Giants for the NL West lead with six games remaining.

The Giants completed a three-game sweep at the Colorado Rockies on Sunday afternoon with a 6-2 win.

Humberto Mejia (0-3) started on the mound for the Diamondbacks and he allowed three runs and four hits in 2 2/3 innings. Mejia struck out one and walked three.

Seager and Turner hit back-to-back solo homers in the first inning for a 2-0 lead.

Seager went deep again in the third to make it 3-0.

The Diamondbacks had their chances early, but stranded six runners through the first three innings.

They loaded the bases with one out in the third, but Urias retired the next two batters with no damage done.

Justin Bruihl stranded two runners in the sixth for the Dodgers. Joe Kelly got three straight groundouts in the seventh, and Corey Knebel retired the side in the eighth.

The Dodgers are scheduled to close the regular season with three games against the San Diego Padres and three against the Milwaukee Brewers, all at Dodger Stadium.

The Dodgers can match the franchise record for most victories in a regular season, set in 2019, by winning their final six games.