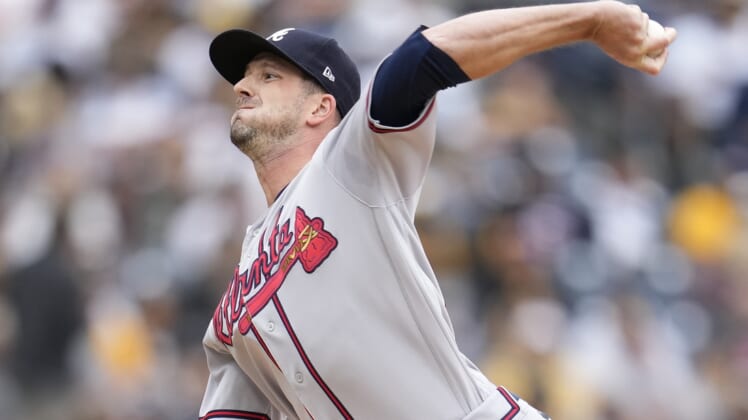 Atlanta closer Will Smith walked the bases loaded in the ninth inning, but registered three strikeouts to escape the jam and preserve the Braves’ 4-3 win over the San Diego Padres on Sunday.

Smith earned his 35th save the hard way, preserving the win for A.J. Minter (3-6). He fanned pinch-hitter Fernando Tatis Jr. before giving up his third walk of the inning to Tommy Pham. But Smith then struck out Trent Grisham and Ha-Seong Kim to finish the game.

A night earlier, Smith pitched a one-two-three inning to earn a save.

Richard Rodriguez (two-thirds of an inning), Tyler Matzek (one inning) and Luke Jackson (1 1/3 innings) kept the Padres’ offense quiet until the ninth.

With its win and the Philadelphia loss, Atlanta (83-72) extended its lead over the Phillies to 2 1/2 games and reduced its magic number to five. The Phillies come to Atlanta for a three-game series that starts on Tuesday. It was the final road game for the Braves, who went 4-2 against the Padres and finished 46-35 away from home.

The Braves went with a bullpen game and got 1 1/3 innings out of starter Jesse Chavez, the first of eight pitchers used.

The Braves took a 3-0 lead after four innings. Pederson hit his 17th home run, a solo shot, in the second inning. Travis d’Arnaud doubled home Austin Riley, then scored on Ehire Adrianza’s single in the fourth.

San Diego tied the score with a three-run rally in the fifth. Jake Cronenworth tripled into the right-field corner to drive in two, then scored on Manny Machado’s single to center. Cronenworth went 3-for-4 with two RBIs.