Sacramento Kings: 3 trade targets with No. 4 pick in NBA Draft

A lot has happened to the Sacramento Kings over the last year. They fired head coach Luke Walton one month into the 2021-22 season and recently hired Mike Brown to run the show on a full-time basis. Prior to the NBA trade deadline, Sacramento traded most notably Tyrese Haliburton and Buddy Hield to the Indiana Pacers for Domantas Sabonis.

As it concerns this offseason, the Kings own the No. 4 pick in the NBA Draft, which could be used to select an enticing young starter. Their other option — and more impactful one at that — is using the draft pick to acquire a star player to play alongside De’Aaron Fox, Sabonis and Davion Mitchell.

Here are three trade targets for the Kings with the No. 4 pick.

Sure, the Kings have Fox and Mitchell, which means they don’t have a pressing need for another guard. On the other hand, Brogdon brings a skill set to the table that the Kings’ rotation doesn’t possess.

Brogdon is a well-rounded combo guard. He’s a reputable outside shooter, who can facilitate, hit the boards and serve as a viable scoring option. Fox is an excellent scorer off the dribble. Mitchell is an explosive, scrappy two-way player. Neither player has a reliable jump shot.

Sacramento was one of the worst perimeter shooting teams in the NBA this past season. Brogdon gives them someone who can slow the game down, sticking jump shots in transition and in halfcourt sets. At 6-foot-5, Brogdon gives them some size in the backcourt. The Kings have shown an openness to load up on ball-handlers, anyway, as they previously had Fox, Haliburton and Mitchell holding down high-minute roles.

Sacramento can use Barnes’ expiring contract to acquire Brogdon while swapping first-round selections with Indiana. The Kings become more efficient on both ends of the floor while the Pacers get another high draft pick (they already select sixth). Indiana could look to reroute Barnes for a future first-rounder.

All that said, the Kings may prefer to move the No. 4 pick for a frontcourt scorer, as adding another guard isn’t of the essence.

Related: NBA Draft trades we could see later this month

As previously alluded to, the Kings have backcourt pieces to be enthused by. They need more frontcourt scoring and upside in general. Hunter fits the bill.

The No. 4 pick in the 2019 NBA Draft is a compelling player with size. At 6-foot-8, Hunter has a proven and capable jump shot from both inside and behind the arc. He has started and found success starting for the Hawks throughout the bulk of his NBA career.

Hunter can be the Kings’ starting small forward and move to the four at the end of games, as Sabonis moves to the five. Meanwhile, the Kings will have the No. 16 pick, which can be used on another starting-caliber player. Perhaps they use that pick on an efficient shooter like Kansas’ Ochai Agbaji or Ohio State’s Malaki Branham?

In moving from No. 4 to No. 15 in the draft, the Kings get an immediate starter whose game still has upside while being able to draft a rotation player in the first round. From Atlanta’s perspective, they move an expiring contract in Hunter and can select an offensive focal point with the No. 4 pick.

The factor that could stop the Kings from acquiring Hunter, though, is them preferring to make more of an immediate impact move, as opposed to a savvy one to fill out their rotation.

Anunoby can supposedly be had via trade, as the Raptors have depth and a plethora of scorers. If indeed available, Anunoby would be an ideal trade acquisition for the Kings.

Sacramento needs more wing scoring and shooting. Anunoby checks both boxes and brings a respectable presence to the table, as well. The career-long Raptor has continually improved on both ends of the floor, becoming a plausible scorer. He’s money from behind the arc, can shoot off the dribble and stumble into points off the dribble. 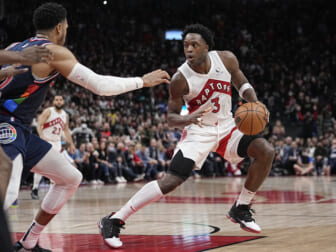 Anunoby spreading the floor and playing to his strengths makes Brown’s offense a more complementary system. The former’s presence allows Fox to score in isolation, Mitchell to grow as a scorer and Sabonis to play from the inside out. A starting five of Fox, Mitchell, Anunoby, Sabonis and Richaun Holmes should spring the Kings into the Western Conference Playoffs.

Moving the No. 4 pick and Barnes for Anunoby is worthwhile for the Kings’ sake. They get a legitimate scorer in Anunoby and move a draft pick that isn’t ideal for their rebooting situation. From the Raptors’ point of view, they get another top-five draft pick (they selected Scottie Barnes, who earned Rookie of the Year honors, with the No. 4 pick in last year’s draft) and an immediate replacement for Anunoby in Barnes.

This trade is a win-win for the Kings and Raptors. Both teams get what they’re looking for.