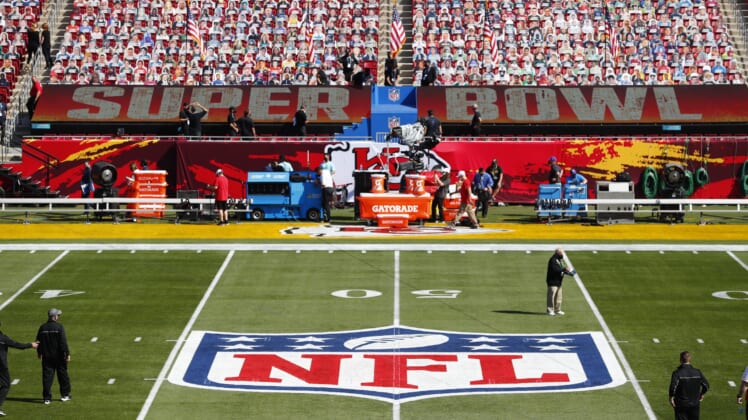 Heading into the 2020 season, the NFL knew it would be unprecedented territory due to the COVID-19 pandemic. Between declining ratings and social-distancing restrictions significantly reducing crowd sizes, it proved to be a costly year for the National Football League.

Before the season kicked off, early estimates suggested the league could lose $3-plus billion in revenue in 2020. When it became possible that the entire regular season could be played without fans, many feared $5-plus billion in potential revenue would be lost with games played in empty stadiums.

While stadium attendance was dramatically reduced this past season, some teams were able to welcome fans. Clubs also came up with creative ways to use the unoccupied sections in their buildings to bring in money. But everyone was paying close attention to how things would fall, with the 2021 NFL salary cap at stake.

With the salary cap now set at $182.5 million, we also now have an idea for just how much money the league lost this season.

In the 2019 NFL season, the NFL generated $16 billion in total revenue. It was a huge moment for the league, with the streak of its profits soaring rapidly every year.

After generating $5 billion in revenue from the 2002 season, that number soared to $12.16 million in 2015 and steadily climbed past that every year since. Thanks to the new CBA expanding the playoffs to 14 teams, with the broadcasting rights to new Wild Card games sold, there was even more money to be made in 2020. That was, before the COVID-19 pandemic.

According to the Sports Business Journal‘s Ben Fischer, the NFL generated just $12 billion in revenue from the 2020 season. It was a significant dip from the pre-pandemic estimate ($16.5 billion) and a $4 billion hit from the money generated in 2019.

It likely didn’t come as a big surprise to Roger Goodell and team owners. With so many teams playing in stadiums at 10-15% of their normal capacity, in the best circumstances, money from game-day sales went out the window. Every club lost tens of millions of dollars, taking a huge toll on the entire league.

It’s why it took so long for the salary cap to be set. Even with new television contracts on the horizon, which could be worth more than $100 billion over the 10-year deals, the economic blow this past season had a major effect. Ultimately, both sides settled on $182.5 million after lengthy negotiations.

Television ratings did take a massive hit this season, with every sport losing millions of viewers every week. While football still reigned supreme, primetime games and Super Bowl LV saw an alarming number of fans tune out. But, with TV rights deals expiring in 2022, networks are ready to sign new deals with the broadcasting rights fees doubling for the likes of NBC, FOX and CBS.

Ultimately, it’s the TV contracts that will save the day. The money generated from the new deals will help spread out the financial blow from the 2020 season, spreading out the losses over the next 10 seasons. Thanks to the new revenue coming in, though, the 2022 NFL salary cap is expected to skyrocket.

As a result, expect many top free agents this offseason to sign one-year contracts. Players will feel the economic hit from the NFL’s lost revenue in 2021, but things will get a lot better for everyone the year after.