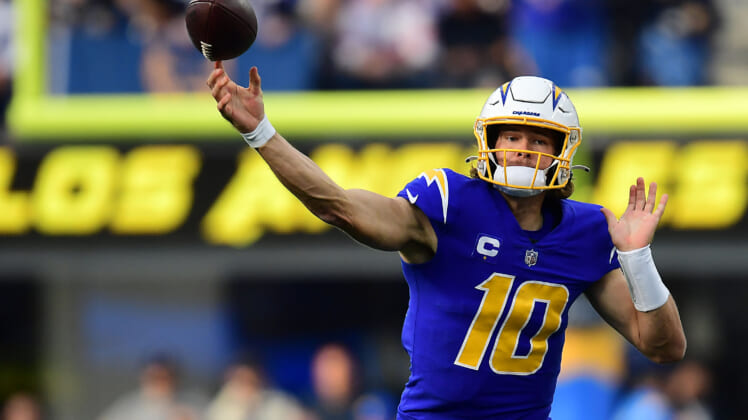 The NFL on Wednesday evening announced its Pro Bowl rosters for 2022 with the annual game set to take place early next year in Las Vegas.

There weren’t many surprises. Tom Brady earned his record 15th Pro Bowl appearance, but will not start for the NFC. Instead, that distinction goes to reigning NFL MVP Aaron Rodgers of the Green Bay Packers. Over in the AFC, second-year Los Angeles Chargers quarterback Justin Herbert will start under center.

The Indianapolis Colts led the way with seven Pro Bowlers. The Kansas City Chiefs and Los Angeles Chargers were second with six. Meanwhile, the Baltimore Ravens, Dallas Cowboys, San Francisco 49ers and Tampa Bay Buccaneers all had five voted in to the Pro Bowl.

Here’s a full look at the Pro Bowl rosters.

Despite a down season, Lamar Jackson earns his second appearance in the exhibition game. Obviously, the biggest surprise is Herbert beating out his AFC West rival in that of former NFL MVP Patrick Mahomes.

It’s not really a surprise Rodgers earned the starting gig over Brady. In fact, the Green Bay Packers star is currently favored to earn his second consecutive NFL MVP award.

Regardless, both are deserving of this honor.

Another note as it relates to the NFC Pro Bowl roster, rookies Micah Parsons and Kyle Pitts earned what will be the first of many appearances in the game.