NFL Playoff predictions Week 17: Closing in on the playoffs 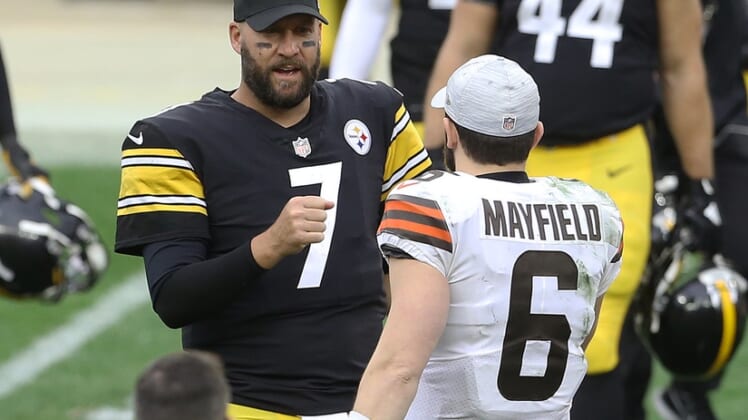 NFL Playoff Predictions: It has been an NFL season like nothing we’ve seen before. The COVID-19 pandemic, player opt-outs, and devastating injuries have headlined much of the year. Unsurprisingly, it’s turned preseason NFL predictions into dust with early favorites slipping and surprise teams emerging as Super Bowl contenders.

If you had told me at the beginning of the season that the Cleveland Browns would be enjoying one of their best seasons in history, I would have admired your wishful thinking. If you had told me New England would struggle, I never would have assumed you meant four straight losses. With division races in flux every week and the expanded NFL Playoffs format creating more opportunities, each game is more significant than the last.

This column will be updated every week to reflect wins and losses, take divisional matchups into account, and include key injuries that impact the playoff race. But, for now, here’s who I think will make it into the NFL playoffs, by division.

In the AFC, the Pittsburgh Steelers have clinched a playoff berth. The AFC West leading Kansas City Chiefs (who have also clinched their spot), as well as the Tennessee Titans in the AFC South and the Buffalo Bills in the AFC East round out the division leaders. The Cleveland Browns, Baltimore Ravens and Miami Dolphins would be given Wild Card slots.

The NFC East comes down to Washington Football Club, New York Giants and the Dallas Cowboys, heading into the final week of the regular season. After Dallas’ huge divisional win over the Philadelphia Eagles and Washington’s loss to the Carolina Panthers, both playoff contending teams take on divisional opponents in Week 17. The Cowboys take on the New York Giants while Washington matches up against the Eagles (who have shown some promise since Jalen Hurts stepped in for Carson Wentz). If the Cowboys win, Washington must win in order to make it to the postseason, but a Dallas loss guarantees Washington’s the division should it win. If the Giants come out on top over Dallas with Philadelphia beating Washington, New York comes out of the east.

With Alex Smith expected to return for the final game, I suspect that Washington Football Club will prevail and slide into the playoffs. I trust Smith’s abilities as a quarterback, far more than I trust Andy Dalton at the helm. Michael Gallup and Ezekiel Elliott had a strong game against the Eagles, but I think Washington is the hungrier, stronger team. I predict they will win, maybe even barely, and prevail out of the NFC East.

The Los Angeles Rams were really making things difficult for the Seattle Seahawks, until they found themselves on the losing side of the Jets’ first win of the season. The Week 16 faceoff ended in the Seahawks’ favor, with Russell Wilson and his team fighting to be on the right side of the 20-9 score. The Rams were in a tough spot with Jared Goff’s broken thumb and, to make matters worse, he is unlikely to play in Week 17. It seems that, ultimately, the Rams will take the top wild card spot in the NFC with the Seahawks having already clinched the NFC West.

With no real competition in the NFC North, the Green Bay Packers officially clinched this division and, therefore, a playoff spot. Aaron Rodgers’s throne atop the North is pretty padded. Teams like this make NFL playoff predictions easy.

The Packers have a huge weapon on their side. Davante Adams called himself the best wide receiver in the NFL and his stats back it up. Adams’ production has been outstanding this year. In 13 games this season, one of which he left after halftime, Adams has 109 receptions, 1,328 receiving yards and 17 touchdowns. Oh, Mr. Rodgers is also cooking. As it stands, he has racked up 4,059 passing yards for 44 touchdowns and only five interceptions. He is definitely back to his MVP-caliber form.

No one could have predicted that Tom Brady would absolutely fall apart in arguably the most crucial game of the season for the Tampa Bay Buccaneers. Before the Week 9 blowout, he hadn’t thrown three interceptions in a game since 2011. The arrival of Antonio Brown made little impact when they hit the field.

The Saints have already secured a playoff spot and the NFC South title, but they could still be playing for the top spot in the NFC. After a loss to the Kansas City Chiefs, New Orleans has a 11-4 record and the Buccaneers have a 10-5 record, so Tampa Bay will take the Wild Card slot. It seems unlikely that New Orleans will lose their last matchup against the Carolina Panthers. Meanwhile, the Buccaneers’ two losses to New Orleans proved to be too much to overcome in the NFC South.

The Arizona Cardinals, Los Angeles Rams and the Chicago Bears are battling for the final spot in the NFC wild card race. Both the Cardinals and the Bears have tough matchups, against the Rams and the Packers respectively, but I suspect that Green Bay will coast through their last game–even though it’s a rivalry matchup–to rest for the playoffs. The Rams, however, will still have to fight to keep themselves from a 9-7 record, putting their playoff spot in jeopardy. I imagine the Rams’ position will push them to victory, and the Bears, who currently control their own destiny, will end their resurgence in the second half of the season by securing the third wild card slot.

The Buffalo Bills have officially clinched the top of their division for the first time since 1995 with an insanely impressive season, causing many a celebration. But, the Dolphins are still in contention, thanks to Tua Tagovailoa and a huge showing from Ryan Fitzpatrick in Week 16. Their 10-5 record is certainly respectable, with help from a string of huge wins. It will definitely come down to the wire, but the Miami Dolphins still have a good chance at the postseason, and are still a huge part of the NFL playoff predictions conversation.

The New York Jets and the New England Patriots have both been officially eliminated from playoff contention, with the latter missing the postseason for the first time since 2008. Rumors are flying that this disappointing campaign cost Cam Newton his job after just one season as a Patriot. Replacement options are already flying around and, for the first time in a long time, NFL playoff predictions will not include the New England Patriots.

The Steelers, after losing two games, came out with a disastrous first half against their rival Cincinnati Bengals on Monday. They couldn’t come back from the 17-0 deficit at halftime, and cost themselves a shot at the first-round playoff bye. Very quickly, they didn’t look like the same team that started the season. But, they returned to form and rallied to win a huge game over the Indianapolis Colts, securing themselves the top spot and taking back the two-game advantage over the Cleveland Browns.

After a COVID-19 scare, the Baltimore Ravens found themselves back in form after a stellar, wildly entertaining divisional win against the Cleveland Browns. It kept their playoff hopes alive, and Lamar Jackson proved himself as great when he came back to the game after yet another injury scare. They haven’t lost a game since, charging back into a wild card slot and returning to the NFL playoff predictions conversation.

The Browns are having a better season than anyone predicted, putting them in a wild card contending spot heading into their Week 17 matchup against the Pittsburgh Steelers. It seems really likely that the Browns will finish the season with a playoff spot.

Kansas City clinched the division lead and a playoff spot, and will boast the AFC’s lone bye week. It’s a no-brainer, and they really are making a strong case for being back-to-back Super Bowl champions. They were early favorites from the start of NFL playoff predictions conversations.

The Las Vegas Raiders are in second place with a 7-8 record, but as it stands, that doesn’t even give them enough to fight for a playoff spot. Sadly, they are showing promise, they are not yet a viable team to be included in NFL playoff predictions.

Tennessee ran into some problems in Week 13 in the form of the Cleveland Browns, but they have recovered well and hold the top spot in the division. That came with the help of a blowout Week 15 win over the Detroit Lions. With the weather getting colder, the Titans can turn to Derrick Henry to stay hot and carry this team. Good things happen when Henry has the football. Look at what he did to bring them to a hard-fought victory over the Baltimore Ravens in Week 11. When Henry’s force is paired with Ryan Tannehill, the Titans are dangerous.

Ultimately, though, I think their massive Week 12 victory over the Colts won them the division lead.

Indianapolis is far from being ruled out, though. If the defense continues to play a high level, with Philip Rivers bringing stability to the offense, the Colts belong in the Super Bowl conversation.

The Colts’ tough loss against the Steelers put them out of a playoff spot after Week 16, but they are definitely still a force to consider for playoff contention. It all rides on their Week 17 matchup against the Jacksonville Jaguars, and just one of the Dolphins, Ravens and Browns losing in the final week of the regular season. In the AFC, it all comes down to the wire for NFL playoff predictions, and wild card choices, found below, are not secure until the very end.

It’s very weird to type that the first Wild Card slot currently belongs to the Cleveland Browns–a phrase no one thought would be included in any NFL playoff predictions. While the Colts are still out of the top spot in the AFC South if the playoffs started today, there is plenty of time to recover. It’s a great story to see Indianapolis back in the hunt, but it’s not even the best part of the AFC’s playoff picture. It’s also great to see Baltimore recovering from their tough Covid break, returning to the form we all know they are capable of being and finding themselves back into NFL playoff predictions. I take both the Colts and the Ravens over the Dolphins for the post-season, just because of their experience and the fight in their game.

No matter what happens the rest of the way, this will be a magical season for the NFL. With the playoff expansion, we could see both the Dolphins and Browns make it in our NFL Playoff predictions. The Browns are putting up a great fight, and I think it will prove a worthy one. Sharing a 10-5 record with the two other Wild Card teams (and another on the outside looking in) is quite the feat, and deserves some attention. Given how much both Miami and Cleveland adore football and the years of atrocious football that have aged the fans, this will be a fun finish. And, if our NFL Playoff predictions prove true, it will be a fun January for many teams.