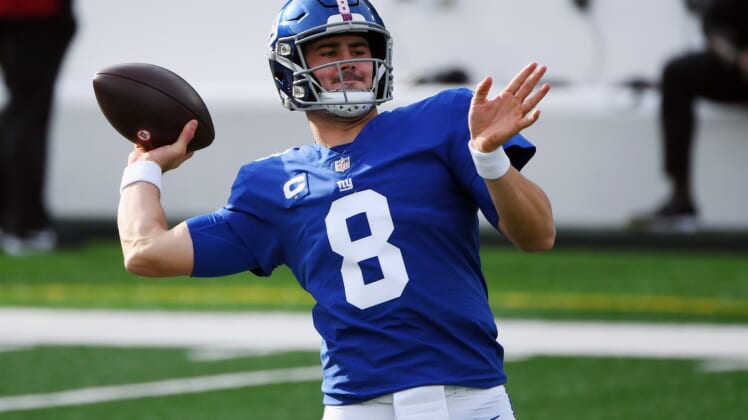 New York Giants general manager Dave Gettleman created controversy when he drafted quarterback Daniel Jones sixth overall in 2019, and while the signal-caller has plenty of room for improvement, Gettleman isn’t giving up on him as the franchise’s long-term successor to Eli Manning.

Gettleman spoke out about Jones’ outlook in meeting with the media prior to free agency beginning, and gave the 23-year-old a ringing endorsement.

Giants.com’s Michael Eisen posted the comments Gettleman had regarding Jones’ future in New York, and suggested the Duke product is still growing and that his best football is still ahead of him:

We’ve had Daniel for two years, we’ve done the evaluation on him and we really believe he’s the guy. No reason to go look. What we’re doing isn’t fantasy football. […] We’ve got a conviction on him, he’s everything we want, he’s got all the physical skills and I say this all the time, the kid just finished his second year of NFL football. How many of us after two years at our new job were great? No, we all start at point A and we hopefully get to point C, but the one common denominator is it takes time. Everybody’s gotta understand that. We believe in Daniel and that’s where it is.

This mentality Gettleman has walks a few fine lines in the modern NFL. On one hand, it can be useful to exercise patience on a quarterback and let him develop. However, rookie contracts are really cheap, and players at the position who make a quicker impact allow GMs to load up the roster with lots of proven veterans.

Jones has flashed some serious skills at the NFL level, yet his penchant for turnovers has been downright alarming. In 27 career games, he’s thrown 22 interceptions and coughed up 29 fumbles.

No matter what skills Jones has shown as a passer and runner, giving the ball away that many times to the opposition is never going to be a winning formula. If he can clean that up, perhaps Jones has a bright NFL future. At this point, though, that’s a big “if.”

Is Daniel Jones the Giants’ long-term answer at QB?

Let’s be fair to Jones. He didn’t ask to be such a high draft pick, and the selection shocked the NFL world and New York in general. Being anointed Manning’s replacement was always going to be a tough billing to live up to, and Jones has handled the pressure quite well to date.

It’s hardly surprising Gettleman went to bat for the defining draft choice of his GM tenure, yet he has a point. Jones didn’t have dynamic tailback Saquon Barkley for most of 2020, and with those two back in action and healthy this coming season, the Giants’ offense should be better by default.

Looking at Pro Football Focus’ data, too, Jones’ passing grade last season was 18th out of 36 qualifiers. He was ahead of players like Joe Burrow, Jared Goff, Drew Brees and Ben Roethlisberger among others. Those latter three QBs were in the playoffs.

Jones is already on his second head coach, too, and had to learn a new offense in a pandemic-shortened offseason last year. With continuity in place entering his third year, perhaps Jones is ready to take a big step forward similar to how Josh Allen burst onto the scene for the Buffalo Bills in leading them to the AFC Championship Game.

The NFC East is a bad division and is completely up for grabs. If New York’s defense continues to build on its solid performance from last season and Jones can simply cut down on the turnovers, the Giants should have a real chance to claim the division crown.

All that is assuming Jones is up to the task. His 6.6 yards per attempt to date is alarming, as is his 62.2% completion rate. Barkley is going to help as a runner and a pass-catcher, but that aid will only go so far. It’s really on Jones to work his tail off in the offseason and get ready to fully take the reins as the Giants’ franchise quarterback.

It seems like the front office and the Joe Judge-led coaching staff are behind Jones. Should he fall short of expectations in 2021, look for Gettleman to be out of a job, and for New York to move on in searching for another young QB who can get the job done.