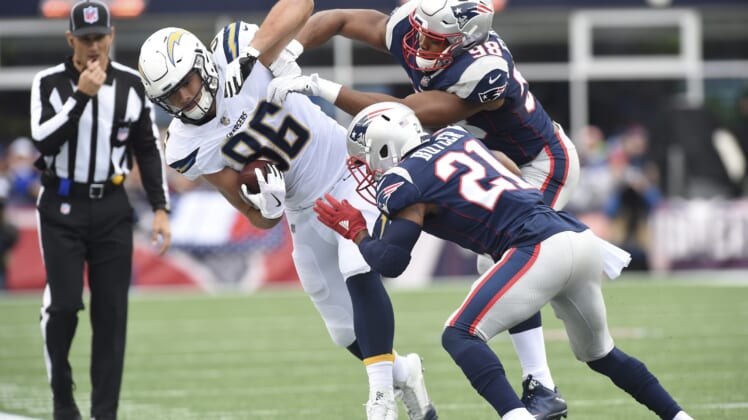 The New England Patriots have officially acquired the top two tight ends on the 2021 free-agent market after agreeing to terms with Hunter Henry on Tuesday.

ESPN’s Adam Schefter broke the news of Henry’s big move, and provided the financial particulars of his new contract:

Henry was the 35th overall pick in the 2016 NFL Draft, and has played for the Los Angeles Chargers for his entire career up to this point.

After playing under the franchise tag in L.A. for the 2020 campaign and recording 60 receptions for 613 yards and four touchdowns, the Chargers opted to go in a different direction instead of paying Henry top dollar.

The Patriots made tons of noise once the legal tampering period for NFL free agency opened on Monday, acquiring Smith, pass-rusher Matthew Judon, wide receivers Nelson Agholor and Kendrick Bourne and defensive back Jalen Mills. They were apparently saving another big move for a day later.

What Hunter Henry signing means for Patriots in 2021

Henry fundamentally changes New England’s offense for the better. Not only is he a dynamic, field-stretching pass-catcher, but he’s a more willing blocker than he’s given credit for.

Tight ends have been an integral part of Patriots offensive coordinator Josh McDaniels’ system during his tenure. Belichick acquired possibly the best one ever in Rob Gronkowski, who’s now playing with his former quarterback Tom Brady as a Super Bowl champion in Tampa Bay.

But all that TB12-Gronk connection stuff is in the past. This new era of New England football has a chance to be something special.

Belichick tried his luck with drafting tight ends in 2020, but third-round picks Devin Asiasi and Dalton Keene were hardly visible. The late offseason addition of QB Cam Newton and a dearth of receivers also didn’t help the offense’s cause.

Upgrading the pass-catching talent was an obvious priority for Belichick, and has he ever delivered.

As ESPN’s Mike Reiss observed, Belichick has actually had an affinity for Henry for quite some time, and has publicly gushed about him before:

Both Henry and Smith provide Newton with massive catch radii and are the type of go-to security blankets he didn’t have the luxury of. Newton teamed with tight end Greg Olsen to be a dynamic passing game combo with the Carolina Panthers, and now he has two Olsen-caliber players to throw to at the position.

That is, if Newton is the starter this coming season. All these crazy moves in free agency seem to suggest New England isn’t going to spend big money on another veteran signal-caller. There simply can’t be enough money left to do so.

Picking 15th in the 2021 NFL Draft, there’s at least some reason to believe Belichick could be scheming a trade up for one of the top QB prospects, which would put pressure on Newton to succeed, lest he get benched for a rookie.

Either way, the Patriots don’t have a long-term successor for Brady in place as of now. In any event, all this open-market spending is going to give Newton plenty of capable players to throw to, which will aid New England’s ability to evaluate him as a viable solution under center, and provide a potential incoming, young field general with a lot of help.