The New England Patriots welcomed quarterback Cam Newton back to practice on Thursday, as he was in the COVID-19 protocols for several days due to a testing issue. Apparently, Newton’s absence didn’t cost him a shot at the starting job.

Even though rookie first-rounder Mac Jones absolutely lit up practice while Newton was out, Patriots head coach Bill Belichick said Thursday that there’s “no timetable” for naming a Week 1 starter, per NFL Network’s Michael Giardi:

Well, there may not be a timetable per say, but the regular season is drawing ever closer, and New England needs to get someone ready to roll.

The only other QB competition in the NFL that was believed to be this close was between Drew Lock and Teddy Bridgewater of the Denver Broncos. On Wednesday, Bridgewater was announced as the Broncos’ starter.

Newton was the presumptive starter for a while, yet Jones, despite being the fifth QB drafted this year at No. 15 overall, is making a strong case to unseat the former NFL MVP.

See where the Patriots fall in our latest NFL power rankings

Enough football and training camp practices have played out by now to the point where the Patriots can probably tell whether or not Newton stands to take a big leap in Year 2 of being in New England’s system, or if Jones is simply ready to take the reins.

There’s no question Jones is more in the mold of Tom Brady, who offensive coordinator Josh McDaniels and Belichick build the Pats offense around for two decades. However, Newton is the more modern breed of QB who can run the ball extremely well. 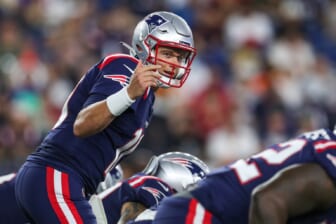 Newton also stands to benefit from an upgraded supporting cast Belichick was uber-aggressive in upgrading during free agency.

Another factor to consider is that Jones hasn’t faced any starting defenses in game situations yet. Playoff expectations are in play, too, which is a lot for a rookie to take on. Jones faced that scrutiny at Alabama and delivered, but the Crimson Tide had a huge talent advantage over every opponent. The NFL is a different game entirely.

It still feels like Newton has the slight edge, but it’s a tricky situation. If one QB is getting all the starter’s reps, that’ll preclude the other from quality work. Complicating matters is how different the signal-callers’ skill sets are, too.

Prediction time: Newton starts Week 1, but could be on the bench as soon as Week 5, when the Patriots travel to Houston to take on the lowly Texans.