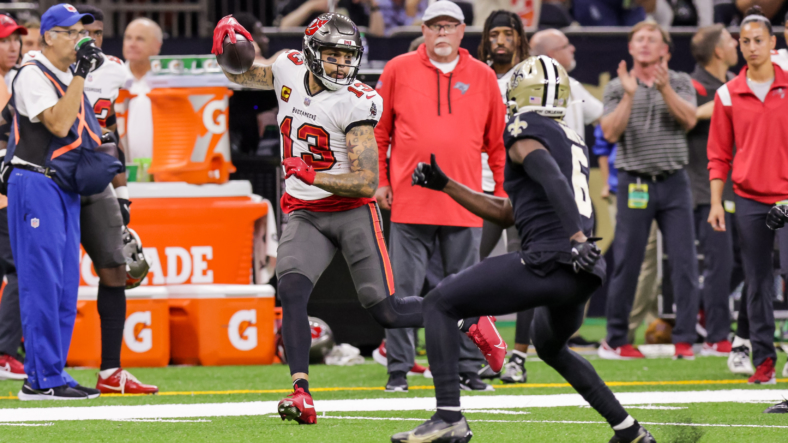 Before the game, Tom Brady was enjoying himself chatting it up with Odell Beckham Jr., who’s in attendance at Caesars Superdome as the Tampa Bay Buccaneers take on the New Orleans Saints. Then, the battle began, and that’s when TB12 got frustrated, throwing a tablet on the sideline.

Later on, Brady was seen exchanging some choice words with the Saints defense, a team he always struggles against. It led to a full-on fight, that eventually culminated with Mike Evans and Marshon Lattimore both getting ejected from the Week 2 matchup.

The Bucs receiver, Evans, comes rushing in with purpose, knocking Lattimore swiftly off his feet. He clearly was looking to get a good hit in on his opponent, something usually only Lattimore can get away with, being that he’s the defender. Seeing his chance to take a cheap shot, Evans went for it. But the refs didn’t miss the hit, and Evans was ejected for the infraction.

We knew tensions would be high in this NFC South rivalry, but no one ever wants to see a fight break out. The Saints have won four of their past five matchups against the Buccaneers, winning two of three at home.

Related: Jameis Winston playing with four fractured vertebrae in his back vs Buccaneers Sunday

Sometimes, a team receives a little motivational boost after the intensity kicks into high gear. Maybe they get a bit more fired up as they look to best their opponent. Well, Jameis Winston, though he wasn’t directly involved in the fight on the field, didn’t bring any extra juice to the table.

The Saints quarterback threw an interception on the very next drive, giving the Bucs a chance to take the lead in a 3-3 tie in the fourth quarter. Brady would later connect on a 28-yard strike to Breshad Perriman for the go-ahead score.