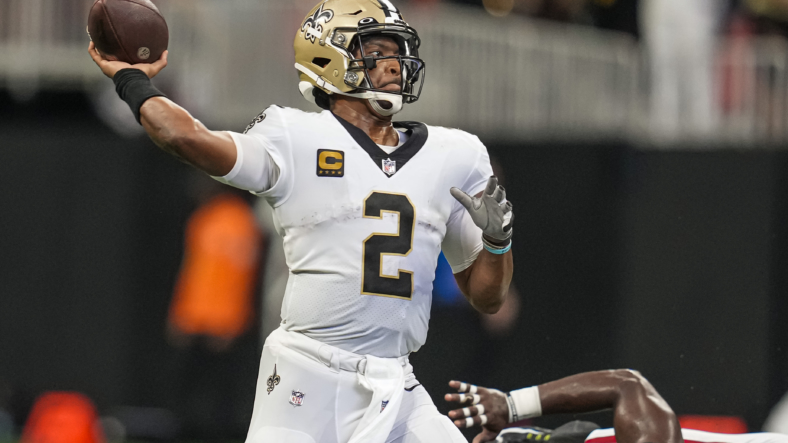 If Jameis Winston and the New Orleans Saints are to take down Tom Brady and the Tampa Bay Buccaneers for the fifth time in their past six matchups, the quarterback will have to do so as he battles through a great amount of pain. According to Jay Glazer, Winston is playing through four fractured vertebrae in his back. To help manage the injury, Winston is wearing additional padding to help cushion any hits he may take today.

We knew Winston was dealing with an injury, as the Saints starting quarterback had been listed with a questionable tag on the NFL injury report. Viewers witnessed Winston briefly head to the medical tent in their Week 1 victory over their NFC South rival Atlanta Falcons with what was labeled a back injury at the time. However, Winston was able to re-enter the game without missing any snaps.

Winston already faces a tall task, taking on a Buccaneers defense that loves to blitz. With first-round offensive tackle Trevor Penning yet to make his NFL debut, the Saints’ offensive front will have their hands full taking on the likes of Shaquil Barrett and Vita Vea.

The backup quarterback is Andy Dalton, and Taysom Hill is always a secondary option to fill in if necessary. Either way, the Saints plan to go full steam ahead with Winston installed as their QB1. As long as the pain doesn’t get any worst, expect him to tough it out through the entire game, absent a blowout.

Of course, Winston used to be a member of the Buccaneers after being drafted to the franchise as the first overall pick in 2015. He spent five years with the team, making 70 starts before moving on to New Orleans, where he’s had to battle for a starting gig.

Winston has started just one game against the Buccaneers in his NFL career. He completed six-of-ten passes for 56 yards and a touchdown in Week 8 of 2021, leading a 36-27 victory. But that’s not the full picture. Trevor Siemian came in after Winston suffered a torn ACL and would miss the rest of the season. In other words, Winston is very inexperienced against Todd Bowles’ defense. We’ll see how he does, at less than 100% on Sunday, especially with Alvin Kamara out of the lineup.