The Brooklyn Nets trading for James Harden changed the hierarchy of the Eastern Conference. How does the Miami Heat move forward after their recent struggles? 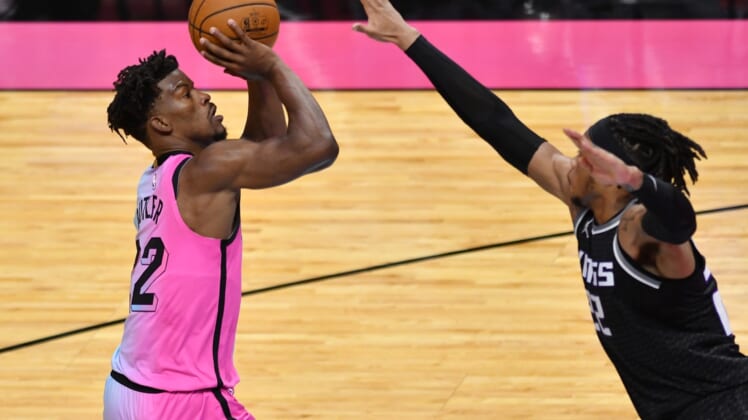 The NBA world was taken by surprise because of the massive deal that sent James Harden to the Brooklyn Nets a few weeks ago. Harden teamed up with Kevin Durant and Kyrie Irving, which is so far the best offensive “Big 3” statistically in the NBA’s modern era. It could be even better than the Miami Heat’s “Big 3” of LeBron James, Dwyane Wade, and Chris Bosh when it’s all set and done.

The move cemented the Nets as the team to beat in the Eastern Conference and maybe the entire NBA. In a league full of dynamic duos, the Nets created the only “Big 3” in the league for the time being. On the other end of the spectrum, the defending Eastern Conference champions are faltering as they dropped another game against the Washington Wizards

The Miami Heat struck out on Giannis Antetokounmpo and Harden, but there are other options on the table for them that can be explored over the coming months. The Heat are always involved in discussions when it comes to disgruntled stars and even if they haven’t landed one of the big prizes, they can never be counted out.

Miami Heat trade targets: Who can they grab to fill in the gaps of the roster?

The Miami Heat’s options over the last couple of months have been dwindling due to recent trades and signings. It started out with Giannis Antetokounmpo, but he re-signed with the Milwaukee Bucks on a super-max contract. Miami then turned its attention to James Harden due to his anger with the Houston Rockets.

Miami explored a deal for Harden, but nothing ever came to fruition and they were not one of the teams contending for him down the stretch. After missing out on arguably two top-five players, where does Miami turn its attention to now?

Victor Oladipo has been one name linked to the Miami Heat for years now. Oladipo has always wanted to be there, and despite his trade to the Rockets, the guard still wants the Heat to acquire his services at some point. Oladipo could be flipped for a package of players and a first-round pick or two. If Miami waits until the trade deadline, they could try to trade for P.J. Tucker along with Oladipo.

Another name that could be expendable is Andre Drummond. The Cavaliers traded a first-round pick for Jarrett Allen and look to be invested in him for the future. Reports say that Drummond’s time in Cleveland could be nearing an end. He could be traded before hitting unrestricted free agency this coming summer.

The Heat should definitely look into Drummond ahead of next month’s trade deadline as they have struggled significantly inside with their offensive rebounds and interior defense. Drummond would be a great acquisition for the Miami Heat and allow them to have a defensive-oriented big man outside of Bam Adebayo.

Kyle Lowry would also make sense for Miami since the Raptors, even though they have improved, could be on the outside looking in. Lowry would be a great fit for the Heat since they lack a true point guard and they could move Herro back to his natural shooting guard position.

Perhaps, they could move Duncan Robinson to the bench if they don’t include him in a deal and acquire another big man so they have a potent duo of Robinson and Goran Dragic coming off the bench.

Other players that could fix Miami’s issues are LaMarcus Aldridge and DeMar DeRozan. The Spurs are entering a rebuild soon and Aldridge is scheduled to hit free agency along with DeRozan. Aldridge could help secure a stable power forward for the Miami Heat, which would be a drastic improvement over Kelly Olynyk and seems to be the most likely option out of the two players.

Related: 5 NBA players who could be traded

Who on the Miami Heat needs to step up to turn the season around?

There are many young players on the Miami Heat that have stepped up over the previous years. Bam Adebayo went from being a bench player to becoming one of the best young stars in the NBA. Tyler Herro went from being slandered by Heat fans to one of the fan favorites after his performance in last year’s playoffs.

There are many players on this Miami Heat team that will have to step up. The biggest player out of that pool is Herro. The young guard is averaging 17.2 points, 6.1 rebounds, and 3.9 assists on 45.3% shooting from the field this year. Herro was a starter in the NBA Finals for Miami but struggled at times on the offensive and defensive end.

Herro was injured for a stretch of games but has since returned to the starting lineup. The 21-year-old guard has been solid, but he has significantly struggled on the defensive end. Something that he needs to improve upon if they want to turn the season around soon.

Adebayo is also another player who needs to step up. Even though he is an emerging superstar, there are still some flaws in his game. Adebayo has struggled with aggression in some games this year and has been inconsistent when it comes to his scoring.

He needs to be confident and aggressive to maximize his potential as an offensive player. The jump-shots have been falling and that is great, but Adebayo needs to be more inclined to shoot the ball sometimes instead of being tied to creating opening looks for his teammates.

Duncan Robinson is the last player that should step up for the Miami Heat. While he is already one of the best shooters in the NBA, there were times during the playoffs that he seemingly disappeared. Robinson needs to find other ways to score the ball. Teams have been more focused on him because the jury is out on his shooting abilities.

Robinson should try to attempt more mid-range jumpers or drive more when it seems like he could do so. There are more ways to score and he has to become more dynamic and not live at the three-point line on offense the whole game. Improving defensively would be huge for him, but the expectations should not be too high when it comes to this.

The Brooklyn Nets arguably have the best roster in the NBA after they acquired James Harden to team up with Kevin Durant and Kyrie Irving. They still have players such as Joe Harris and Jeff Green, along with Iman Shumpert and Norvell Pelle, who they signed from free agency. It’s clear the Miami Heat don’t have enough to match up with superteam.

The main players in the Miami Heat’s lineup are Jimmy Butler and Bam Adebayo. They also have specialists such as Tyler Herro, Duncan Robinson, and a really well-rounded defensive anchor off the bench in Avery Bradley. The problem for Miami is that they have way too many one-way players to contend with a team of Brooklyn’s caliber.

The Nets have three of the best scorers in the game with Irving, Harden, and Durant. It’s reasonable to see the Heat stop one or two of them alone, but the addition of Harden puts them over the top. Adebayo would guard Durant, Butler on Harden, and Irving would be shared by the others.

It’s a very hard feat for Miami to shut down all three scorers and if they can’t even stop the Wizards, it’s simply not possible. The Nets also have DeAndre Jordan, who poses a massive mismatch if they have someone such as Kelly Olynyk on him. This is where a move for someone such as Drummond would be beneficial.

The Heat have to outscore the Nets because it is clear that no one’s going to hold them to a low-scoring game. However, Miami has only scored above 90 points four times in the last seven games. They will need to make a move for an elite shooter if they want a chance, most likely.

Even if things in Brooklyn don’t click and it’s a massive mess the rest of the season, this team will not be able to beat the Lakers. They got significantly better during the offseason and certainly don’t have players coming off the bench where Miami could take them for granted like last season.

Herro will need to make a massive jump on both ends and Adebayo will need to be consistent every single night. There are so many holes in this Miami Heat team that it is difficult to know which hole to plug in their lineup. There are simply too many to count for on this team.

People are saying that their NBA Finals run last season was a fluke and as of right now, they could be right. The Miami Heat have lost two straight games against teams under .500 and are on the brink of losing control of the season if they do not pick it up soon. They need to find that chemistry from last season and re-gain a winning mentality.

Without making a move to patch up holes such as starting point guard, power forward, and in the interior, it is very unlikely that they will contend in the East, let make the NBA Finals. It may be time to panic soon if they don’t pick it up and it’s okay to be realistic and understand this roster needs massive improvement internally or from an external source.

It’s clear this roster is not good enough to beat the NBA’s best teams without some help. If you believe in this organization and its players, you also have to trust Pat Riley, because he is going to need to fix what is going on internally if the Miami Heat want a shot at another playoff run.