Victor Oladipo eyes the Miami Heat despite being traded to the Houston Rockets in the recent James Harden deal. How would an Oladipo to Miami trade work now? 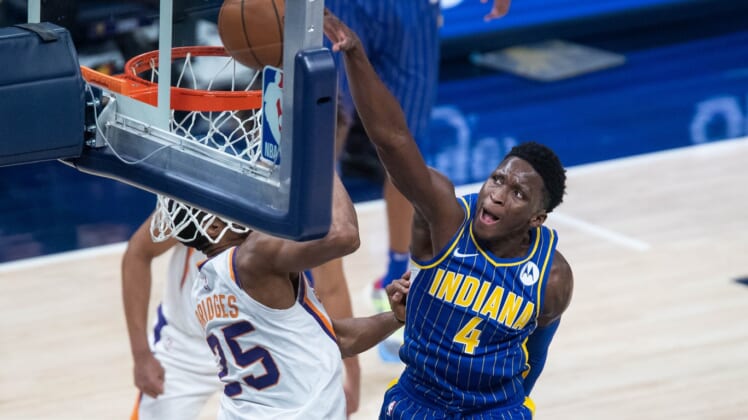 The most shocking news about the James Harden trade to the Brooklyn Nets on Wednesday afternoon may have not been Harden himself. The Rockets traded for Caris LeVert and then flipped him to the Indiana Pacers for Victor Oladipo.

Oladipo, who had been wanting out of Indiana, is the biggest name Houston received in the trade. However, it seems like Oladipo still eyes for another team to acquire his services.

According to The Ringer’s Kevin O’Connor, Oladipo does not want to be in Houston and still wants to land with the Miami Heat. The Heat struck out on Harden after pulling out of talks before the season began. Oladipo has averaged 20.0 points, 5.7 rebounds, and 4.2 assists in nine games this season.

Will the Heat attempt to trade for Oladipo after his move to Houston, or be patient until he enters free-agency?

How do the rules regarding a Victor Oladipo trade work for the Miami Heat?

The Harden-Nets trade was finalized Thursday morning on a call to the league office. Because this trade became official, no one involved may be sent out in a trade with another player until March 4, 2021. There is a way to land Oladipo if the Miami Heat decided to pursue him today, though.

Oladipo can be traded right now if the Rockets would only send him to the Heat, with no one else tagging along in the deal. This would work because the rule states that a recently traded player cannot be aggregated with a player in another trade until the date they are tradeable again.

For example, if the Heat wanted to trade for Victor Oladipo and P.J. Tucker, they would have to wait until March 4 because he is being sent out with Tucker. If the Heat only wanted Oladipo, the Rockets could send only him to Miami and the trade would be legal.

It is not known whether the Heat are interested in a trade now or even later on in the year, but it may be something to explore since they missed out on Giannis Antetokounmpo and James Harden.

What will it take for the Miami Heat to trade for Victor Oladipo?

Oladipo has a $21.0 million cap hit for the 2020-21 season with Rockets. The price for Oladipo in the trade was Caris LeVert and a future second-round pick. The draft compensation was very minimal in the deal, however, Houston may want more draft capital to build forward with in the future.

The Heat could wait until the trade deadline to do this trade, which would unlock Meyers Leonard and Goran Dragic from not being tradable due to the contracts they signed in the offseason. The Heat won’t trade Dragic and Leonard may not have any value outside of an expiring deal.

Miami could include Kelly Olynyk ($12.1M), Kendrick Nunn ($1.6M), KZ Okpala ($1.5M), and a 2025 lottery-protected first-round pick and that may be enough to trade for a single player in Oladipo. It’s clear the 28-year-old guard will most likely not return to the Rockets, so trading him for extra cap space and a first-round pick is better than nothing.

This would also allow Miami to own Oladipo’s bird rights and help sign or re-sign other players during the 2021 offseason. Some within the Heat organization think Okpala may have a bright future ahead of him. If this would not be an ideal trade, perhaps they could include Chris Silva and lean back on some of the restrictions on the 2025 first-round pick.

Houston may not have much leverage considering it is well known around the NBA that Oladipo has been screaming at Miami to take him for the past year. This would be a good trade for the Rockets to bring back two young players and a heavily protected first-round pick.

The only question at the end of the day is whether the Heat want Oladipo as much as he wants them. Oladipo is a free agent this offseason, so there could be a way to acquire him then.

However, if they are serious about improving the backcourt, having someone like Victor Oladipo, who is begging for Miami, could prove to be beneficial for the team.