The Milwaukee Bucks and Giannis Antetokounmpo agreed to terms on the largest contract in NBA history on Tuesday. 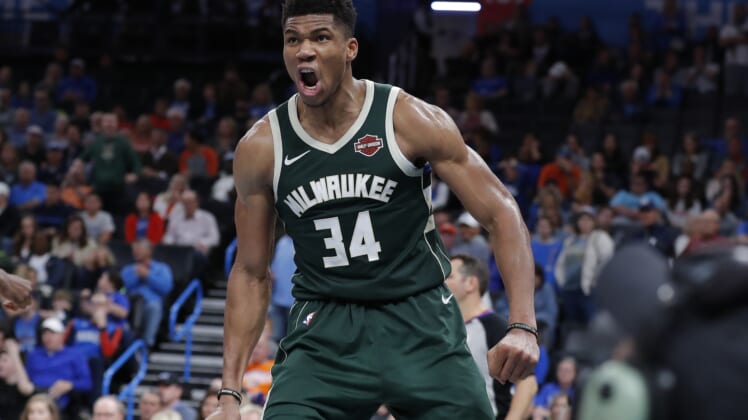 The Milwaukee Bucks secured back-to-back MVP Giannis Antetokounmpo for the foreseeable future on Tuesday, as the Greek Freak signed a five-year, $228.2 million contract extension in the NBA’s most lucrative deal ever.

This vanquishes any team’s hopes of landing the 26-year-old phenom as a free agent, as the upcoming NBA season was going to be Giannis’ last with the Bucks before hitting the open market. Instead, Milwaukee got the job done and retained its biggest superstar.

Shams Charania of The Athletic reported the news of Antetokounmpo’s contract. For good measure, Giannis took to social media to confirm he was in fact remaining with the Bucks for the presumed prime of his career:

Skepticism was rightfully rampant that Giannis wouldn’t ultimately re-up with the Deer, and instead pursue greener pastures as a free agent, whether it be in more of a destination city or playing for a squad with a more obvious championship shot. However, Giannis is single-handedly a franchise changer in his own right, and is determined to make it work in Milwaukee. Although he hasn’t delivered a Larry O’Brien Trophy yet, there’s reason to believe his time will come soon enough.

From a basketball standpoint, all the pieces were in place for Milwaukee to compete for a title this coming season and beyond. Having achieved first place in the Eastern Conference each of the prior two years, all the Bucks did was improve this offseason, notably through the trade for All-Star guard Jrue Holiday.

Giannis is the reigning Defensive Player of the Year and already formed a fearsome tandem with Khris Middleton. Their combination of length and athleticism helped create numerous problems for Milwaukee’s opponents. Now, Holiday enters the mix as arguably the best on-ball perimeter defender in all of basketball, which should only help the Bucks come playoff time.

But having this contract situation all taken care of even before the 2020-21 NBA campaign begins is massive for Milwaukee. It would’ve been the biggest elephant in the room in franchise history if Giannis was playing through this season without a new contract. As more time went by, speculation would swirl that his days with the Deer were numbered. No words could do justice to how much of a distraction it would be. No metric could measure it.

While the expectations should still be championship-or-bust year in and year out with Giannis around for the long haul, at least the weight and necessity of accomplishing that elusive task immediately is vanquished. Bucks general manager Jon Horst deserves a lot of credit not only for constructing a strong roster around his most prized star, but also not being intimidated in negotiations that could’ve caused a lesser 37-year-old NBA executive to shrink.

Horst got it done. He landed a clear, dynamic upgrade at the lead guard spot and a legitimate two-way player Holiday. Most importantly, Milwaukee can breathe a collective sigh of relief. Giannis is there to stay. The little market franchise that could. It’d be nice to see the basketball gods reward the Deer with a championship in short order, but according to DraftKings’ odds, the reigning champion Los Angeles Lakers (+275) are favored over the No. 2 co-favorite Bucks and Clippers (+550).