The Miami Heat have struggled to find an option at power forward this season. After dropping to 7-13, here are five potential trade targets at the 4 for Miami. 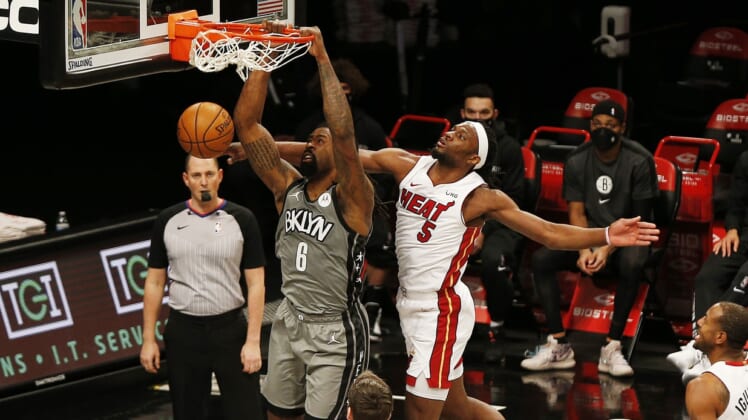 The Miami Heat suffered a very bad loss Monday night when they lost 129-121 in overtime against the Charlotte Hornets. The Heat blew a 10-point lead in the final three minutes of the game and were outplayed in overtime.

There are many ways to look at this game and have concern, but not an outright panic yet. Miami had all of its players back except Moe Harkless and Meyers Leonard. However, two of those players in Goran Dragic and Avery Bradley have recently returned and are still knocking off some rust.

The big issue for the Heat is their hole at the 4 position. They successfully ran Andre Iguodala during the game, but then went away from him when it mattered most. They have had numerous players play the position, but none have been able to successfully solve this issue.

Here are five players that could turn around Miami’s season and solve their situation at the power forward spot.

Thaddeus Young may be the perfect fit for the Miami Heat. Young is averaging 10.3 points, 5.4 rebounds, and 4.4 assists on 56.5% shooting from the floor. The 32-year-old forward is playing his best basketball as a Chicago Bull and is showing his ability to be a two-way player.

Miami currently lacks two-way options and are more one dimensional. Young is 6 feet and 8 inches, which provides a nice fit next to Bam Adebayo, who is the only functional big on most nights since Precious Achiuwa isn’t fully ready to take that next step.

The Chicago Bulls are 8-11 on the season and most likely will not make the playoffs. Young is averaging 25 minutes per game on the team and it may be smart for Chicago to move the forward when he is playing at his best. Young has two years remaining on his deal earning around $14 million a year.

If the Miami Heat trade for a power forward, Young may be one of the better options for them.

It may be unrealistic considering that Richaun Holmes loves being with the Sacramento Kings, but what if they start to falter near the deadline? Holmes is on an expiring contract worth $5 million while he is playing the best basketball of his life. Holmes is averaging 12.9 points, 8.0 rebounds, and 2.0 assists in 30.5 minutes.

Holmes’ defense has been very good with a defended field goal percentage of 45.7 this season, which would rank close to Bam Adebayo on more shots defended per game. He has revived his career with the Kings after three years in Philadelphia and one in Phoenix.

The 27-year-old forward is shooting 67.3% from the floor, which also includes jump-shots from 10-16 feet at 77.8%. That would be even better than Adebayo this year as he is shooting 58.8% from the field. The two would be a great fit next to each other.

Holmes may not be available at the deadline, but if the Kings do make him available, Miami needs to jump on it right away.

How about another Kings player in Nemanja Bjelica? That name may not be an eye-popping name to Miami Heat fans, but there are many benefits from making a deal for Bjelica. The 32-year-old forward is averaging 6.6 points, 3.6 rebounds, and 1.9 assists in only 15.1 minutes. He has been out due to back spasms.

The Heat could use their $7.6 million trade exception that they acquired in the Andre Iguodala trade last season to bring Bjelica, or Holmes, to the team. Bjelica’s contract is a $7.15 million expiring deal entering unrestricted free agency this offseason. They have until March 22nd to use the exception.

Bjelica’s three-point shot is down to 23.8% after three straight seasons of being a 40% plus shooter. Injuries have impacted his season which could explain his number being down. However, Bjelica’s defended field goal percentage is at 43.1, which is even better than his current Kings teammate Holmes.

He’s not a flashy name, but it could be the solution to Miami’s whole at the four position.

LaMarcus Aldridge is on an expiring contract earning $24 million for the San Antonio Spurs. The Heat have shown interest in Aldridge before and they could look at him again if the price is right. Aldridge is averaging 14.1 points, 4.3 rebounds, and 1.9 assists in 26.7 minutes.

He may not be what he once was, but the idea of adding more size next to Adebayo would be appealing. Aldridge can still make three-pointers at a 35% clip but does struggle to rotate on defense at some points during the game. Kelly Olynyk, Kendrick Nunn, and a heavily protected first-round pick may interest the Heat, but that could also be too much.

He most likely would need to be had for a low price with better options on the market for the Heat.

P.J. Tucker is on the smaller side at 6 feet and 6 inches, but he could be what the Miami Heat are looking for defensively. Tucker is averaging 5.4 points, 4.6 rebounds, and 1.3 assists, but the stat-line is not what’s most important for Tucker. His calling card is on the defensive end of the floor.

Tucker has a defended field goal percentage of 42.3% from the three-point line, which is not the best compared to others, but it’s still better than four players for the Heat that are in the rotation. The Rockets either want one first-round pick or three second-round picks in a deal for Tucker. Personally, I would be willing to give the Rockets a first-round pick.

They could also try to package Victor Oladipo in a deal with Tucker, who has expressed interest in coming to the Miami Heat. Whatever the Heat decide to do, they need to patch up the holes in the boat. The issue at the four spot isn’t going away soon and the answer is not on the team right now.