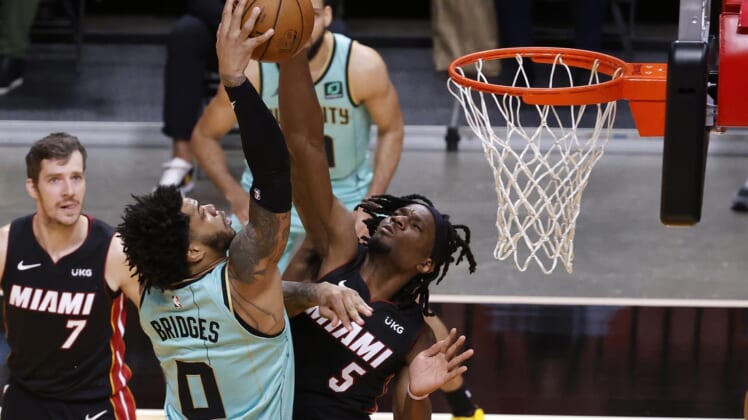 Monk, who entered the game averaging 6.3 points, made 11-of-18 shots, including 9 for 13 on 3-pointers. He also made a 3-pointer with 17 seconds left in the fourth quarter to force overtime.

Charlotte, which trailed 111-101 with 2:47 left in the fourth, then dominated the overtime to win its third straight game.

The Heat’s Max Strus, an undrafted player competing in just his 13th NBA game, had 17 of his career-high 19 points in the first half.

Miami got good news as Goran Dragic (groin injury) returned after missing three straight games. The 2018 All-Star was off with his shot — just 1-for-9 — but he had eight assists and seven rebounds.

Cody Zeller had a double-double with 19 points and 12 rebounds. But Hornets starter P.J. Washington sprained his right ankle in the third quarter and did not return. He finished with six points and seven rebounds.

Miami, which led by as many as 11 points in the first quarter, suddenly went cold. Charlotte went on a 9-1 run on three Monk 3-pointers, cutting its deficit to 29-28 at the end of the first quarter.

The Heat, though, regained their momentum and stretched their small lead to 57-54 at halftime, thanks to a 17-9 edge in points off turnovers.

Charlotte came back, ending the third quarter on a 17-5 run to take an 88-82 lead into the fourth.

Miami started the fourth quarter on a 12-3 run, taking a 94-91 lead. Charlotte forced overtime by ending the quarter on a 12-2 run. Monk, using a Zeller screen, made that three-pointer with 17 seconds left to tie the score.

Butler, who has not made a three-pointer this season, missed from long range with 0.2 seconds left, forcing OT.