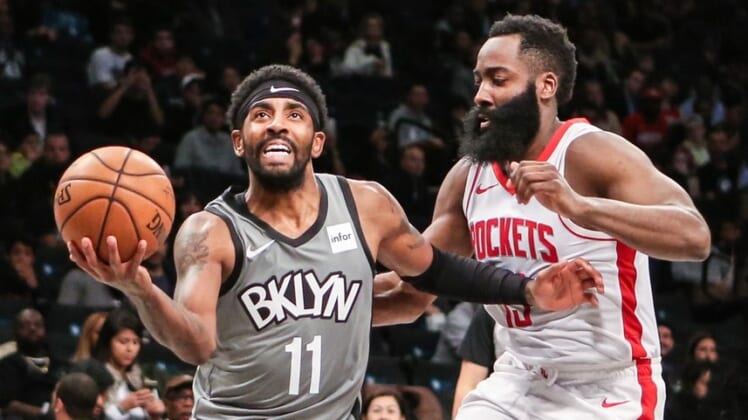 The move everyone has been waiting for. James Harden has been traded from the Houston Rockets to the Brooklyn Nets in a blockbuster four-team deal that shakes up the foundation of the NBA as we know it.

Brooklyn now forms a super team in the truest sense of the term with Harden, Kevin Durant and the embattled Kyrie Irving. The Rockets start anew with four future first-round picks. Meanwhile, the Cleveland Cavaliers made out big time by acquiring stud young center Jarrett Allen in the deal.

These are among the biggest winners and losers from Wednesday’s mammoth James Harden blockbuster trade to the Brooklyn Nets.

Winner: Cleveland Cavaliers make out like bandits with Jarrett Allen

Cleveland general manager Koby Altman saw an opportunity for the rebuilding team. Apparently, the Houston Rockets had no interest in stud young center Jarrett Allen in the James Harden trade. Said opportunity presented itself in the form of the Cavaliers acquiring Allen for a mere first-round pick that wasn’t even their own. Veteran guard Dante Exum became nothing more than a throw-in for salary reasons.

What an absolutely brilliant trade for Cleveland. Allen, 22, is averaging 11.2 points and 10.4 rebounds on a resounding 68% shooting from the field this season. He’s seen as a potential All-Star big man moving forward. Acquiring the youngster for pennies on the dollar is huge for Cleveland. He’ll join a talented young core that includes Darius Garland, Collin Sexton and rookie first-round pick Isaac Okoro. Cleveland will now also likely move All-Star center Andre Drummond for a return that will be larger than the one it gave up for Allen. Altman just proved himself to be an expert chess player.

The backdrop to this huge Harden trade is Kyrie Irving’s sudden departure from the Nets. The NBA champion has missed the past three games due to “personal” reasons. It’s not yet known what led to Irving leaving Brooklyn. Though, some indicate that it’s mental-health related. As his Nets were taking on Denver Tuesday night, Irving could be seen in a Zoom conference call with a New York-based politician.

What does this all mean? The Nets must be growing tired of Irving and his antics. While a trade remains highly unlikely due to the volatile environment that Irving carries, Brooklyn does not have to rely on him to be a No. 2 to Kevin Durant. Even without Irving in the mix, these Nets are a championship contender with Durant and Harden pairing up once again.

It was noted during the 2019-20 season that Brooklyn was looking to make a move to acquire a third star and create a super team. Bradley Beal was mentioned as one of the possibilities. Despite pretty much yielding their next seven drafts to Houston in this deal, Marks did just that.

It was always going to be win-now mode for the Nets when they signed both Durant and Irving during the summer of 2019. That wasn’t lost on Marks as he made the James Harden blockbuster deal. He now has three future Hall of Famers on the same team, all of whom are under contract for multiple years. Taking over a rebuilding team back in 2016, Marks has now built the Nets into a perennial contender. They are also now the toast of New York City over a much more historically-significant Knicks team. That’s no small thing.

It was always going to be difficult for the 76ers to pull off a James Harden trade. New Philadelphia front office head Daryl Morey left Houston under less-than-stellar conditions following the 2019-20 season, creating a rift with embattled Rockets owner Tilman Fertitta. Expecting the two sides to work together didn’t make much sense. That’s also evident by the fact that Morey pushed back against reports that he was willing to offer up Ben Simmons in a Harden trade.

Even then, the 76ers took a major step back by “allowing” a conference rival to acquire Harden and build a super team. Prior to this trade, Philadelphia was seen as a top-end contender with the Celtics and Nets. Now, it’s highly unlikely that a team led by Simmons and Joel Embiid will be able to compete with the Nets. Perhaps, this will end up being a precursor to Morey breaking up the duo.