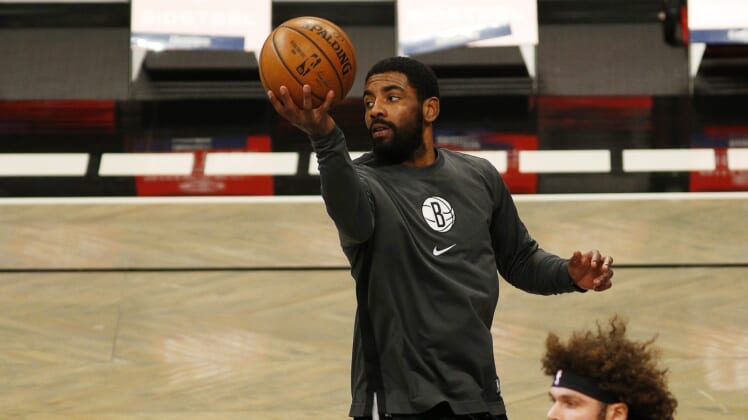 Kyrie Irving has been nothing more than the center of drama in just over a season as a member of the Brooklyn Nets. This was the case for the most part during his debut campaign with the team back in 2019-20. Even with Kevin Durant back in the mix, Irving has proven himself to be an outcast in the Big Apple.

That all took a dramatic turn last week when Irving was listed as out for a game citing personal reasons. There’s many different theories as to what happened behind the scenes. However, a recent report suggesting that he was attending a birthday party for his sister against NBA COVID-19 protocols adds another layer to this whole story.

The NBA is now investigating this situation with Kyrie Irving potentially set to lose a whopping $460,000 per game he misses due to said violations.

Tuesday’s game against the Nuggets represents the third consecutive outing the NBA champion has missed. It also has the Nets speaking publicly on this situation.

That doesn’t seem like a general manager who is happy with the Irving situation. In reality, who can blame Sean Marks? His organization did everything possible to cater to Irving during a disastrous 2019-20 season.

The entire idea was to bide their time without Durant on the court and see what might happen once the two-time NBA Finals MVP returned. At least initially, the Irving-Durant pairing looked unstoppable. Things have obviously changed since then.

Talk about potential mental health issues relating to Irving have given in to the possibility that the star guard could just up and retire. To say it’s a strange situation would be an understatement. However, this doesn’t seem to be a sustainable situation for the Nets.

Nets must bite the bullet and trade Kyrie Irving

At this point, the Nets are not going to get anything of substance for Irving. Among other things, the questionable status as it relates to his future in the NBA is clouding this situation. The star guard’s previous actions and personality both add another layer to the situation.

Even then, Brooklyn must find a way to snuff out the drama that has clouded the organization since Irving signed. If that means taking on bad contracts and potentially sending a draft pick or two out the door, then so be it.

Irving is slated to make $33.3 million this season. His four-year, $136.5 million deal calls for combined cap hits of $71.7 million over the next two seasons. Good luck finding a team to take that on without offering up sweeteners.

Perhaps, the Sacramento Kings ae willing to take on this drama while sending out disgruntled guard Buddy Hield and getting back a couple first-round picks. Heck, the New York Knicks attempted to go all in for Kyrie Irving during the summer of 2019. Maybe they will show interest.

What we do know is that the Nets find themselves at 5-6 on the season. Despite missing four games due to COVID-19 protocols, Kevin Durant is back in NBA form. They simply can’t wait another minute for this Irving situation to play out and expect the same drama that has surrounded him to magically disappear.

The Nets need to find a way to bring this Irving-related drama to an end. If it means biting the proverbial bullet and trading him, we’d be hard-pressed to find someone outside of the guard’s inner circle that would disagree with it.