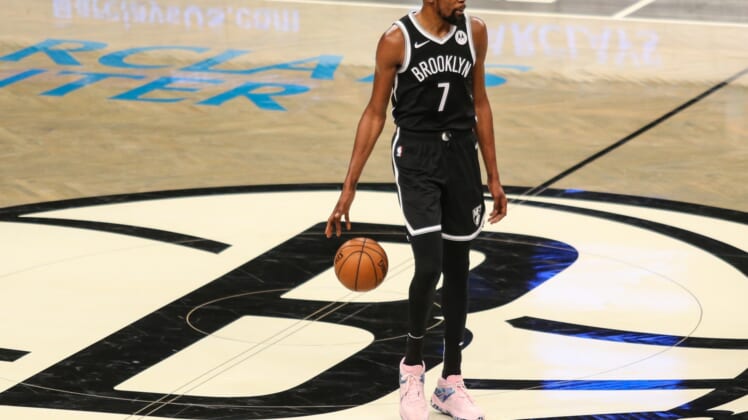 Kyrie Irving and Kevin Durant had not played in a single regular-season game together before their Brooklyn Nets opened the 2020-21 NBA season against the Golden State Warriors on Tuesday.

Taking on his former Warriors team, Kevin Durant laid waste to Golden State early on. He connected on 4-of-7 shots for 10 points in the first quarter. Kyrie Irving went off for 17 points on 6-of-8 shooting in the first 12 minutes as the Brooklyn Nets took a resounding 40-25 lead after the initial stanza.

It was something to behold.

If these Nets play like this with Kevin Durant and Kyrie Irving leading the charge, they are going to be nearly impossible to beat in the Eastern Conference moving forward this season. It’s one of the primary reasons some have the Brooklyn Nets earning a trip to the NBA Finals.

For Kevin Durant in particular, this has to be sweet. He has not suited up since June of 2019 after suffering a torn Achilles as a member of these Warriors. To be able to put on this show against his former team. Well, it has to make Durant feel pretty awesome. Those watching from home also had their reactions.

This is a statement for the Brooklyn Nets. Sure it’s coming against a Warriors team without Klay Thompson and Draymond Green. But those excuses will only go so far.

Even if it is just 12 minutes into the 2020-21 NBA season, it’s looking more and more like the Kevin Durant and Kyrie Irving tandem in Brooklyn is going to be something else moving forward.