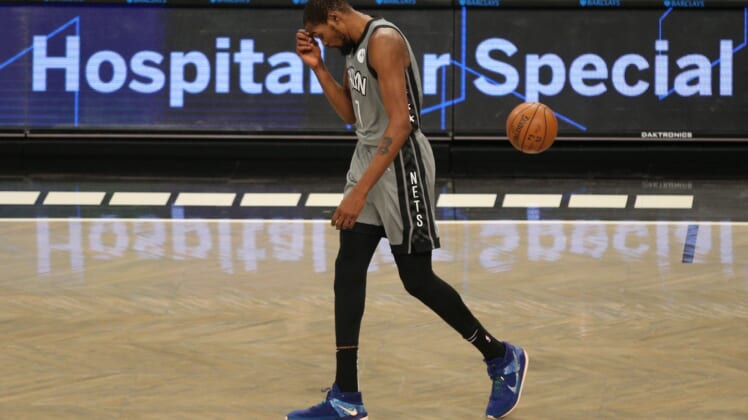 Brooklyn Nets star forward Kevin Durant has made NBA news a ton over the first two weeks or so of the 2020-21 season. Returning from an Achilles injury that cost him all of last season, the two-time NBA Finals MVP looks 100% and is seemingly one of the best players in the Association once again.

Unfortunately, it looks like Durant’s redemption tour will be put on hold for the next week or so. According to multiple media reports, the Nets’ star will have to be in quarantine for the next week after potentially being exposed to COVID-19.

“Kevin Durant’s facing a 7-day quarantine under league protocols because of exposure to a positive COVID-19 case,” ESPN’s Adrian Wojnarowski reported Monday. “He had the coronavirus in May, continues to register antibodies and has tested negative in multiple recents tests. He’d miss 4 games in next week.”

As noted, Durant tested positive for COVID-19 during the spring. He’s still registering for antibodies, meaning that contracting the virus is not a possibility. Despite this, the NBA protocols surrounding the virus doesn’t differentiate between the two. That’s seems to be a bit foolish given the science of it all.

Taking a look at the Nets’ upcoming schedule, Durant’s quarantine would force him to miss four games.

To say this is not great NBA news for Brooklyn would be an understatement. The team sits at a disappointing 3-4 on the campaign and has lost four of its past five.

As for Durant, he continues to play at an elite level. In six games to start the 2020-21 season, the all-time great forward is averaging 28.2 points, 7.0 rebounds and 4.8 assists on an otherworldly 46% shooting from three-point range.

All of this comes with the NBA attempts to play a season outside of the bubble-like atmosphere we saw at Walt Disney World in Orlando during the restart late last season. Obviously, there’s going to be some complications here.

NBA news will continue to focus on the Association’s COVID-19 protocols until a vaccine becomes readily available to the public. It’s in this that players violating said protocols could face some rather stiff fines. Just ask one James Harden.

With that said, it is highly unlikely Kevin Durant will be subject to a fine. Even then, it does tell us a story about the NBA season amid a growing pandemic in the United States. The Association seeing one of its top players sidelined for four games simply due to contact tracing adds another layer to that.

As it is, this is a learning process for everyone involved. What seems to be ridiculous, as one might conclude with this recent Kevin Durant news, could make sense moving forward.

It’s all about making sure the 2020-21 NBA season goes off without the same issues we’ve seen recently relating to both the NFL and MLB. As for Commissioner Adam Silver and Co. they continue to handle the pandemic better than any of the major professional sports in North America. Maybe, give them the benefit of the doubt.