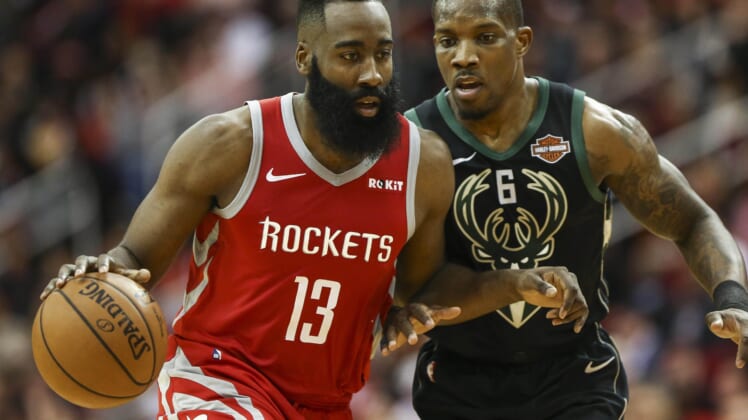 A video surfaced earlier this week that seemed to show Houston Rockets star James Harden parting in a strip club, in violation of the NBA COVID-19 protocols.

Harden has since denied that he was in fact at a strip club on Monday night. Rather, the embattled three-time reigning scoring champion indicated that he simply attended a friend’s birthday party.

Regardless of the exact details, James Harden did in fact break the NBA COVID-19 protocols. He’s now being disciplined by the Association for it.

To say that $50,000 is chump change for someone earning $42.78 million annually would be a vast understatement. However, the NBA is certainly making a statement with the 2020-21 season now ongoing.

This comes after the Rockets’ season opener against the Oklahoma City Thunder slated for Wednesday evening was postponed due to COVID-19 issues within Houston’s locker room. For his part, James Harden has tested negative for COVID-19 twice this week.

Unlike when the 2019-20 NBA season restarted inside a Walt Disney World bubble, teams are hosting games at their home venues this season. At least of a half-dozen teams plan to have a limited number of fans in attendance. It’s going to be trying for the NBA to complete the 72-game schedule without any difficulties as COVID-19 continues to spread around the United States unchecked.

As for James Harden, this is the second time in a month that he has allegedly violated the NBA COVID-19 protocols. He was seen partying in Georgia and Las Vegas as the Rockets’ training camp got going earlier in December.

The backdrop here is obvious. James Harden has requested a trade from the Rockets as the situation in Houston is said to be toxic. He’s obviously not doing himself or the organization any favors right now.