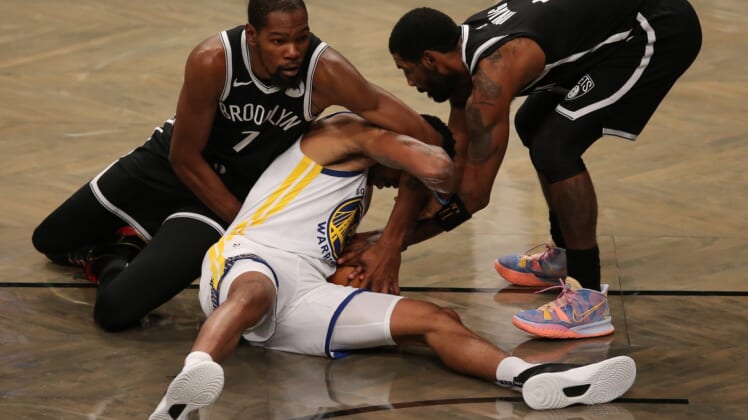 It was billed as Brooklyn Nets star Kevin Durant’s return to action against his former Golden State Warriors team. It was one heck of a way for the 2020-21 NBA season to start under the bright lights of the Big Apple. Durant and Kyrie Irving taking on a rejuvenated Stephen Curry.

The 2020-21 NBA season opener did not live up to expectations. The Brooklyn Nets proved to be in a completely different class compared to the Golden State Warriors. Riding 27 combined first-quarter points from Durant and Irving, the Nets took a 15-point lead after the first 12 minutes.

After a fairly competitive second quarter, the Brooklyn Nets blew this thing open in the third quarter en route to this game being nothing but garbage time from that point on. Here’s the top takeaways from Brooklyn’s 125-99 season-opening win over the Warriors.

The Brooklyn Nets are scary good

It came out in droves early in the first quarter on Tuesday night. Making his first appearance in nearly 17 months after suffering an Achilles injury, Kevin Durant scored 10 points in the first five minutes of the game. He looked like his old, pre-injury self. We’re talking about a dude who was hitting over defenders, driving to the lane and popping up to shoot. It was something to behold.

If that weren’t enough, Kyrie Irving went on a flurry to end the first quarter. It pretty much put the game away before the Brooklyn Nets broke into a sweat. Already one of the most-talented teams in the NBA, the cohesion we saw from Steve Nash’s squad in Irving and Durant’s first game together was something to behold. It should have those in the Eastern Conference concerned. In the end, Irving and Durant combined for 48 points in just 50 minutes of action.

The Golden State Warriors need a second scorer to step up

We heard about how good the Kelly Oubre acquisition looked for the Golden State Warriors after the devastating season-ending injury to Klay Thompson. Some around the Bay Area expected Andrew Wiggins to take that next step after inconsistencies with the Minnesota Timberwolves. At least for one game, none of this came to fruition.

Oubre and Wiggins combined to shoot a god-awful 7-of-30 from the field. They also committed a combined seven turnovers while each player finished minus-28 on the evening. Without Thompson in the mix, Stephen Curry needs someone else to step up. Wiggins and Oubre showed flashes during the preseason. That did not happen Tuesday evening.

There’s been Brooklyn Nets rumors surrounding a potential James Harden trade. In fact, this team was originally favored to land the three-time reigning NBA scoring champion. Said trade would have included Caris LeVert being sent to Houston as part of the package. Still only 26 years old, the Nets might want to rethink that strategy.

After being a part-time starter over the past couple seasons, this wing might very well compete for the NBA Sixth Man of the Year award in 2020-21. LeVert finished Tuesday’s opener scoring 20 points, grabbing nine rebounds and dishing out five assists while finishing a resounding plus-18 in just 25 minutes of action. If he can lead the Brooklyn Nets second team like this, watch the heck out.

Seeing his first action in 13 months, this rookie No. 2 pick was a surprise start for the Warriors. Wiseman didn’t play during the preseason due to a bout with COVID-19. He suited up in less than a handful of games for Memphis last season due to issues with the NCAA and the season being suspended over COVID-19. No one really expect the talented 7-foot-1 center to show a .lot in his debut.

Boy, were we wrong. Raise your hand if you had Wiseman finishing as the Golden State Warriors second-leading scorer behind Stephen Curry. The dude scored 19 points on 7-of-13 shooting while grabbing six rebounds and coming away with two steals. Regardless of how raw he is and the fact that he might have been a bit rusty, Wiseman more than proved himself as a top Rookie of the Year candidate despite the Warriors’ blowout loss.