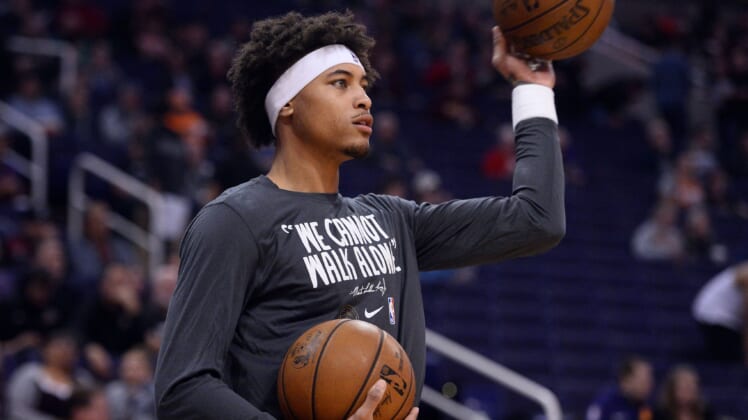 The Golden State Warriors found their replacement for Klay Thompson, reportedly closing in on a trade with the Oklahoma City Thunder to acquire small forward Kelly Oubre Jr on Thursday.

Hours after the Warriors learned Thompson suffered a ruptured Achilles tendon in his right leg, Golden State is reportedly finalizing a deal to address its pressing need on the wing before the 2020-’21 season.

As first reported by The Athletic’s Shams Charania, the Warriors are closing in on a deal to land Oubre Jr. from Oklahoma City. The Thunder just recently acquired the 24-year-old forward, landing him in the blockbuster Chris Paul trade.

Before Klay Thompson’s season-ending injury, which he suffered on Wednesday, the Warriors were projected to be a top contender for the NBA Finals. All of that changed when MRI results confirmed Golden State’s worst fears.

Given the Warriors should realistically land in that range, Oklahoma City has a great shot at having three first-round picks in a loaded 2021 NBA Draft class. It would also mean the Thunder hav 18 first-round picks through the 2026 NBA Draft.

With a $17.2 million trade exception set to expire on Monday and an immediate need at the wing, general manager Bob Myers needed to make a move quickly. In a win-now window, the Warriors have found their answer.

Of course, it will come at a significant cost for the organization. According to ESPN’s Bobby Marks, Golden State’s luxury tax bill will skyrocket from $66 million to $134 million, meaning Oubre will cost the Warriors’ ownership $82.4 million for the 2020-’21 season.

While the financial hit would be tough to take under normal circumstances, it will be even more challenging this year. Coming off a season that saw the NBA lose more than $1 billion in revenue. Things should improve this season, with the NBA allowing some fans to attend games, but that might not be the case for Golden State.

Because of surges in COVID-19 cases, especially in California, the Warriors aren’t expecting to have fans in attendance for the 2020-’21 season. Things could change if a vaccine becomes readily available, but the organization is likely anticipating its new stadium will be empty for much of the season.

From an on-court perspective, this is a fantastic add for the Golden State Warriors. Oubre, who will be a free agent at the end of the 2020-’21 season, is an excellent fit for this lineup and his stats reflect his impact.

The No. 15 overall pick in the 2015 NBA Draft, Oubre Jr. enjoyed a breakout year this past season with the Phoenix Suns. Playing in a career-high 34.5 minutes per game, he averaged 18.7 points, 6.4 rebounds and 1.3 steals per game.

Oubre Jr. can’t replicate Thompson’s impact and the Warriors aren’t expecting that. However, he fills a massive void that was created when Golden State’s five-time All-Star went down.

With Curry, James Wiseman, Draymond Green, Andrew Wiggins and Oubre, the Warriors are back in the thick of the Western Conference. They might be a tier below the Los Angeles Lakers, but this team should be in no danger of missing the playoffs.