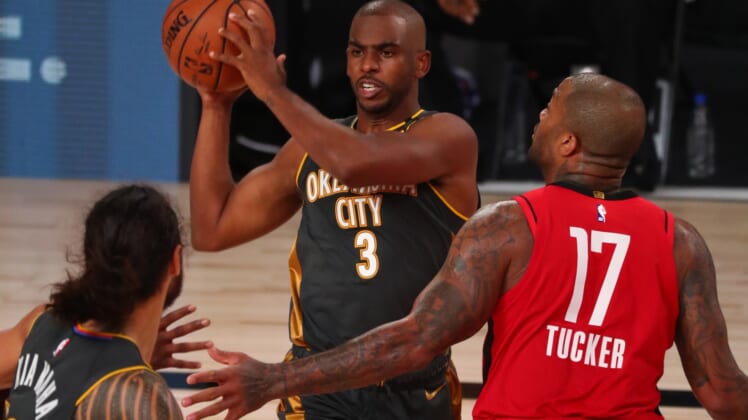 The Chris Paul trade has gone through. Hours after the NBA started to allow teams to make deals official, the 10-time All-Star has been traded from the Oklahoma City Thunder to the Phoenix Suns in a blockbuster move for both teams.

Phoenix sends Ricky Rubio, Kelly Oubre, Ty Jerome, Jalen Lecque and a 2022 first-round pick to Oklahoma City in the Chris Paul trade. It’s a high price for Suns general manager James Jones to pay. However, he really was hellbent on finding a running partner for star two-guard Devin Booker. In Paul, Phoenix has just that.

As for the Thunder, they continue to build up a talented young roster while adding draft picks at nearly every turn. This move comes after Oklahoma City dealt Dennis Schröder to the Los Angeles Lakers in a trade that brought back a first-round selection in this week’s NBA Draft.

Here are the biggest winners and losers from Monday’s blockbuster Chris Paul trade.

Presti has now indirectly added three first-round picks and two pick swaps in the Russell Westbrook trade from prior to the 2019-20 NBA season. Given that the Rockets are finding it hard to trade Westbrook right now, that’s an absolute coup.

Existing in a small market, Presti has found a way to keep his Thunder competitive on a consistent basis. Sure moving Paul will hurt short term. However, this was always the long-term plan.

All said, this is what Oklahoma City has acquired Westbrook and Paul George trades.

That doesn’t even take into account stud small forward Kelly Oubre, who Oklahoma City picked up in the Chris Paul trade. The 24-year-old wing averaged 18.7 points and 6.4 rebounds on 45% shooting from the field last season. Talk about lopsided. All said, the Thunder now have 17 first-round picks over the next eight years.

The Philadelphia 76ers are still looking to acquire James Harden in a blockbuster trade with the Houston Rockets. However, it now looks like the Brooklyn Nets are favored to land the former MVP.

Why is this relevant? It’s rather simple. New 76ers front office head Daryl Morey has a built-in relationship with Paul. He wanted to have this as an option should a Harden trade fall through. Add in new Sixers head coach Doc Rivers’ relationship with Paul, and that’s magnified further. Philadelphia is now back to the drawing board.

Other top-end contenders showed interest in the 35-year-old Paul as a way to help them get over the hump this coming season. Instead, the Suns were able to pull off the blockbuster move and likely move within the top-six or so of the Western Conference moving forward.

Duh! While Ricky Rubio was a solid point guard from a passing perspective, he really didn’t help Booker when it came to scoring in the back court. Paul brings another element to the Suns’ backcourt. Primarily, an ability to shoot from the outside.

Here’s a guy that’s averaging 18.3 points on a resounding 38% shooting from distance since the start of the 2014-15 season. That consistent outside shooting ability is only going to help take some of the onus off Booker. And imagine the star shooting guard finding more open shots. It would be game over in the desert.

When Houston dealt multiple first-round picks to Oklahoma City for Westbrook ahead of the 2019-20 season, the expectation was that these Rockets would be able to contend for an NBA title.

Similar to what we’ve seen throughout the Harden era in Houston, that did not come to fruition. Even with two former NBA MVPs sharing the back court, these Rockets were eliminated in the conference semifinals.

Now, more than a year removed, the Rockets are without both their head coach and general manager of the past several seasons. Westbrook and Harden seem to want out of dodge. The team lacks draft picks to retool on the fly. Indirectly, these Rockets are a loser of Monday’s Chris Paul trade.