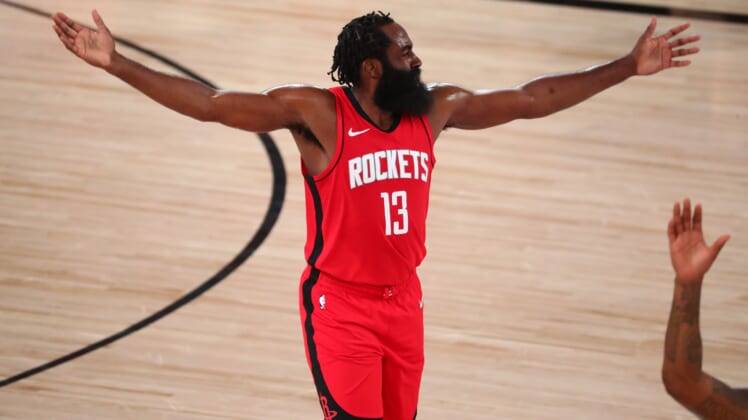 Sep 10, 2020; Lake Buena Vista, Florida, USA; Houston Rockets guard James Harden (13) reacts after getting called for a foul in the first half against the Los Angeles Lakers in game four of the second round of the 2020 NBA Playoffs at AdventHealth Arena. Mandatory Credit: Kim Klement-USA TODAY Sports

NBA rumors have suggested that Houston Rockets guard James Harden violated COVID-19 protocols during an alleged trip to a strip club on Monday.

Since then, the NBA opted to fine Harden $50,000 for violating said protocols. For the star guard, this comes on the heels of some major drama between himself and the Rockets’ organization.

We now have more information on what violating NBA COVID-19 protocols will cost players who end up missing games. It’s not great for the likes of James Harden and Co.

“If a player misses a game because he’s in quarantine after breaking COVID protocols, that would cost 1/72nd of his salary this season,” Tim Reynolds of the Associated Press noted Wednesday evening. “It’s not the suspension formula for how much cash a player loses. It’s much more severe.”

That’s absolutely crazy stuff right there. Obviously, the NBA is taking this pandemic and its policies seriously as the league attempts to conduct a 72-game season outside of the bubble-like atmosphere we saw during the NBA restart last season.

As for James Harden, this would amount to him being out $570,000 for every game he misses. The three-time reigning NBA scoring champ boasts a salary of $41.26 million this season.

NBA rumors: Will James Harden miss any games due to COVID-19 quarantine?

A separate report from ESPN’s Adrian Wojnarowski, notes that James Harden and the Rockets are awaiting word from the NBA medical staff on how long he’s going to have to quarantine.

The Rockets’ next game is scheduled for Saturday against the Portland Trail Blazers after their opener on Wednesday was postponed due to a separate COVID-19 issue within the organization. Even after having tested negative for the virus this week, James Harden will likely not be on hand for that game.

All of this comes with NBA rumors suggesting that the situation between Harden and his Rockets is toxic after he requested a trade from the team during the fall. It’s definitely not a great look for the former league MVP.

Since the James Harden trade demand became public record, NBA rumors suggest that the likes of the Miami Heat and Brooklyn Nets have cooled off on acquiring the star guard. Meanwhile, the Los Angeles Clippers are out of the sweepstakes after signing Paul George to a contract extension.

Obviously, we’re going to be hearing more NBA rumors as it relates to a potential Harden trade. With that said, his off-court antics could be turning off potential suitors. That makes all the sense in the world given what we’ve seen from Harden.

This also comes after Harden violated COVID-19 protocols when the Rockets’ training camp started earlier in December by partying in both Georgia and Las Vegas.

For his part, the star guard denies that he was actually at a strip club Monday evening. Instead, he indicated that he went to a party for a friend and left after 30 minutes.

Videos of said party shows more than 15 people on hand in a closed-air environment without social distancing and masks. Regardless of whether Harden’s statement denying that he was at a strip club rings true, he still violated the NBA COVID-19 protocols.