The Los Angeles Clippers, for better or worse, are committing to Paul George for the long haul with a four-year, $190 million max contract extension. 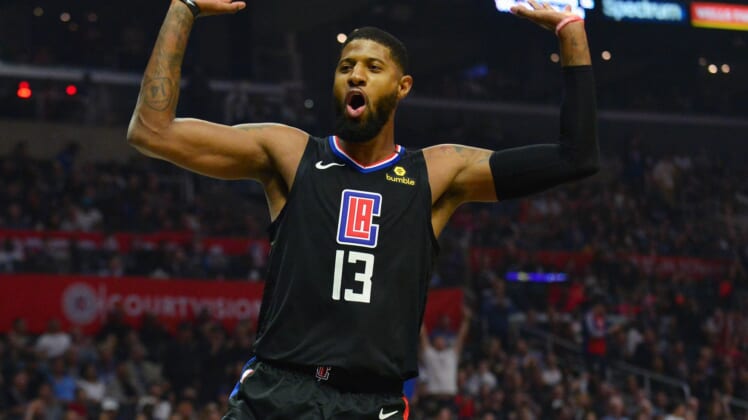 The Los Angeles Clippers, for better or worse, are committing to Paul George for the long haul with a four-year, $190 million max contract extension.

George would’ve had a player option in his contract after the 2020-21 season and therefore was likely slated to be a free agent, but this extension keeps him in L.A. to stay.

News of Paul George’s max extension came from ESPN insider Adrian Wojnarowski, who’s never wrong, and as such this can be reported as news and not a rumor. George’s contract now totals five years and is worth up to $226 million in guaranteed money, per Woj.

This is quite a shock. A recent report that detailed how George and fellow star Kawhi Leonard were heavily catered to during their maiden season together in 2019-20 called into question the duo’s collective leadership. As has been widely documented, George fell short in the playoff this year, shooting less than 40% from the field as the Clippers blew a 3-1 second-round lead to the Denver Nuggets and saw their championship hopes dashed.

Despite the underwhelming two playoff series he participated in and the injuries that held him out for prolonged periods during the regular season, there were stretches where George played extremely well for the Clips. In 48 regular-season contests with Los Angeles, he’s put up averages of 21.5 points, 5.2 rebounds, 5.7 assists and 1.4 steals. He attempted 7.9 3-pointers per game and connected on 41.9%, which is super efficient, especially given the volume of long-range shots George took.

Any concerns about George’s ability to fit in the organization’s long-term plans seem to be put to bed for now. What stirs curiosity is the fact that PG13 got the extension before Leonard. Having won three championships during his time with the San Antonio Spurs and one magical year with the Toronto Raptors, Leonard is now the one whose future isn’t secure in L.A.

Is the George contract extension a precursor to some other big move? Or is it just a logistical situation, coincidence, or simply a wait-and-see approach on Leonard’s part, since he has a player option following the conclusion of the 2020-21 season? It’s probably safe to assume the Clippers are working to lock Leonard down as soon as possible, because he’s the proven champion who’s performed at the highest level on the big stage.

When there are more questions than answers raised by a perennial All-Star signing a max contract, though, something is probably wrong. As the squad stands as of now, the Clippers do have the means to compete for a championship, even though their cross-town rivals, the Lakers, are the reigning champions. The Purple and Gold have only improved their roster during the offseason, even poaching Sixth Man of the Year Montrezl Harrell from the Clips.

Harrell’s departure offered greater financial flexibility under the salary cap, which may be part of the motivation to re-up with George almost a full calendar year before it was necessary.