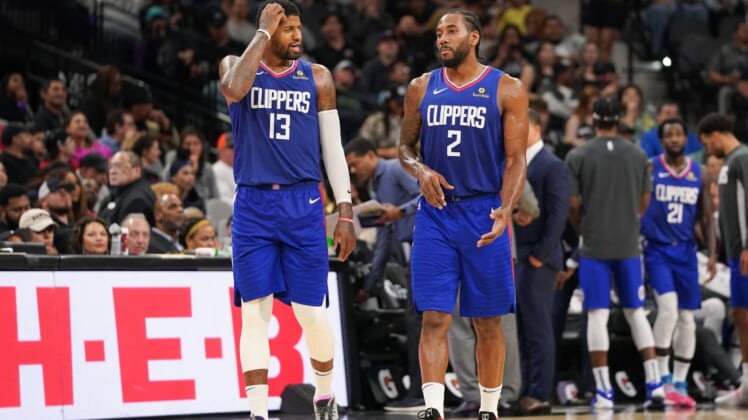 Kawhi Leonard and Paul George had better make this Los Angeles Clippers’ NBA season a make-or-break, championship-or-bust situation, because if they don’t establish a stronger leadership standard, they won’t win a title together, and the band may well break up after the 2020-21 campaign.

What looked like the formation of a dynamic duo on paper last offseason collapsed catastrophically in the postseason, as the Clippers blew a 3-1 series lead to Denver in the Western Conference semifinals. That’s on Leonard and George, the leaders of the team, who reportedly aren’t doing much for team camaraderie, to say the very least.

According to a — well, what’s the opposite of a glowing review? Per a scathing appraisal of the situation around last season’s Clippers squad from The Athletic’s Jovan Buha, Kawhi Leonard and Paul George didn’t exactly set a championship-caliber tone for Los Angeles’ locker room, which only made the job harder for eventually-fired head coach Doc Rivers.

“I thought from the beginning, ‘We’re doomed,'” a team source said. “‘Kawhi wants too much special treatment.'”

What was this special treatment Leonard demanded? How about a private warm-up space before every game, which just so happened to be the women staffers’ locker room. And that’s merely the tip of the iceberg, as George subjected the franchise to ridiculous demands of his own.

Buha provides an exhaustive list, but in summary, the tandem of Leonard and George had their own personal trainers and security team, left teammates to speak to the media for much longer periods of time, had massive influence over team schedules for practices and traveling, and led teammates to believe they could pick and choose when they subbed in and out of games.

Plus, Leonard commuted from San Diego and was often late for the team plane, and he was often tardy for trips. From what Buha heard, the other Clippers players thought this superstar treatment was excessive than typical demands, and it led to others not buying in to Rivers and the overall culture.

Neither Kawhi Leonard nor Paul George are vocal leaders

Why is that a subheading? Why is that important? Well, it’d be one thing if these guys had gregarious personalities, joked around with teammates, built chemistry and didn’t act above everyone else. Maybe even the illusion of not being above the team at first could’ve been presented by both All-Stars. Unfortunately, that’s not their personality types, and that’s not how things played out.

Los Angeles rolled out the red carpet for Leonard and George. They took full advantage, and nary made much of an effort to get better acquainted with their new teammates. As arguably the best two-way player tandem in the NBA, apparently they figured they’d just feel their way through the season, sit whenever they desired, and remain fresh enough for the playoffs.

And to think: Who would’ve told Leonard and George differently? No one could have. Even after COVID-19 drastically altered the season, they were one win away from the Conference Finals; from a potential matchup with the eventual NBA champion Lakers that everyone was expecting and excited for.

Then, the cracks in this squad started to show, and this latest report highlights how Leonard and George are a problem. The former was part of a San Antonio Spurs culture steeped in championship pedigree before he even arrived. After forcing his way out of there to the Toronto Raptors for one year, a strong core was already in place, and Leonard knew he was on borrowed time, so it was OK for him to just show up, do the work, and did he ever. Boom! Another championship.

But now it’s Leonard’s show, and George is the Batman to his Robin after proving he couldn’t be Batman in Indiana, much less Robin alongside Russell Westbrook in Oklahoma City. The problem is, now Leonard is looked upon to be the legitimate leader and face of a franchise. If not him, George has to step up and do it, like Kyle Lowry did for Kawhi in Toronto. Thus far, it’s not happening — and based on the buzz around last year’s squad, it may well never happen.

Will Kawhi Leonard and Paul George fix this Clippers mess?

The incentive is admittedly barely there. Leonard has a player option on his contract after this season. So does George. As the Nuggets fought back from adversity in rallying to knock off the Clippers in the most recent playoffs, it exposed how Leonard and George weren’t really built to withstand such a valorous fight.

No more room for excuses or lack of chemistry, especially since it seems evident the alleged best duo in the NBA going into last season played a huge part in alienating the rest of the team. It got a championship-winning coach in Rivers fired, and led to Sixth Man of the Year Montrezl Harrell jump ship to the Lakers.

What will give? Harrell has been part of a vastly retooled roster across town that has recently re-signed LeBron James believing in the Lakers’ ability to repeat as champions. Losing Harrell was a big blow to the supporting cast flanking Leonard and George, not to mention they still have to negotiate the Denver squad that knocked them out of the playoffs and the Dallas Mavericks with Luka Doncic and Kristaps Porzingis continuing to rise among the NBA’s superstar hierarchy.

Is there hope to be had for Clipper Nation? To provide at least a small counterpoint: George claimed recently that Rivers misused his skill set:

Is new head coach Tyronn Lue the right man to get George and Leonard in lockstep with the rest of the team and pointed in a proper, unified direction? At least in PG13’s case, he can’t get much worse. Going by the moniker “Playoff P” was a mistake this past year, as George came up small in the postseason, shooting less than 40% from the field.

Despite a mostly brilliant maiden campaign in L.A. for Leonard (27.1 points, 7.1 rebounds and 4.9 assists per contest), he didn’t deliver on championship expectations. Never has he been the true leader on a squad carrying such a burden.

It may not be a question of whether or not Lue can coach this 2020-21 team. He helped LeBron to a championship with the Cleveland Cavaliers, so his ability to lead and scheme shouldn’t be in much doubt. It’s probably more dependent on how Leonard and George change their leadership style from isolated and above the team to inclusive and part of the team.

If they can’t adapt, this team may not survive, one or both of Leonard and George may well go their separate ways, courtesy of declining their lucrative contract player options.

Take the heat, Kawhi and Playoff P. Buy into Lue. Keep everyone involved on your team. Speak up when things don’t wrong. Don’t go quiet. Don’t let this unprecedented, exciting era of Clippers basketball — wherein the perpetual little-brother franchise can at least temporarily usurp the Lakers for L.A. superiority — go to waste after a disappointing, two-year curtain call.