Bam Adebayo's confidence in his mid-range jump shots continues to grow as he evolves. What does this mean for the Miami Heat coming off of his breakout season? 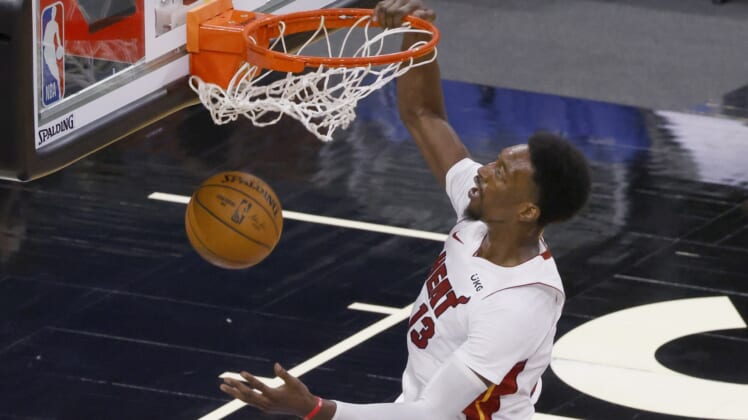 The Miami Heat were sloppy in their regular-season opener loss against the Orlando Magic. They committed 22 turnovers, with a combined 17 between Jimmy Butler, Bam Adebayo, and Tyler Herro.

However, one of the bright spots for the Heat during Wednesday night’s game was Bam Adebayo. The forward had 25 points, 11 rebounds and four assists on 11-of-16 shooting from the floor in 35 minutes.

The biggest aspect of Adebayo’s game that has improved is his jump shot. It was on display in the preseason, but the young All-Star showed that it might be here to stay.

Bam Adebayo’s confidence in his jump shot has grown, which is dangerous for the rest of the NBA. Adebayo shot the ball 16 times in Miami’s first game, with four of them occurring outside of the paint.

Adebayo made three of the four shots, with all of them coming at the top of the key. His jump shots in general came in at a 50% clip on six shots. It’s a very small sample size, but it’s just the beginning of what we could see on a nightly basis.

One of the biggest things for Miami is Adebayo’s ability to stretch the offense. Jimmy Butler has struggled shooting three-pointers since he came to Miami in 2019, and his best skill has been driving to the hoop or pulling up in the mid-range area.

If Adebayo can earn the trust of opposing coaches with his shooting of 16 feet plus, they will have to commit their defense on him at a longer distance instead of backing off. This could create a less-crowded paint, and allow a more potent offense with cuts and movement.

Pat Riley compared Adebayo to former SuperSonics forward Shawn Kemp when he was drafted. However, if he can continue to stretch the floor and expand his shooting, we could be seeing the second coming of Kevin Garnett.

Jimmy Butler and Bam Adebayo are arguably among the top echelon of defensive players in the NBA. Butler is a scrappy competitor who built his game on defense as a young player, while Adebayo is gifted with the ability to guard the one to five positions every game.

Butler’s scrappiness was on display Wednesday night when he brought home a career-high seven steals in 36 minutes of action. It’s not a surprise for Butler knowing how he plays the game, but it was another example of why the two Heat stars are by far the last duo you want to see on the defensive end.

Adebayo only had one block during the Magic game, but last season he averaged a career-high 1.1 steals and 1.3 blocks. Just like in every area of his game, Adebayo will continue to prove he is a force on the defensive end and even has been projected to be this year’s Defensive Player of the Year by some writers.

There may not be a tougher player than Butler or a more giftedly talented defender than Adebayo, let alone on the same team. The second most important thing for the Heat this season behind Adebayo’s offense could be his defensive improvements.

Bam Adebayo will continue to make his presence known on the defensive end every game. However, with higher confidence on offense, Adebayo may be given the keys to the offense, as predicted in our Miami Heat season preview.

Few players can do what Adebayo can. He is a special athlete who continues to grow and not become satisfied, even with his brand new contract he signed this offseason.

Pat Riley knew he had something special in Adebayo when he drafted him, but the scary thing about Adebayo comes down to one thing in his fourth NBA season. He can only get better from here.