Miami Heat rumors have started to pick up as the team falls to 7-14 on the season. Here are three trade scenarios for the Heat to turn around their season. 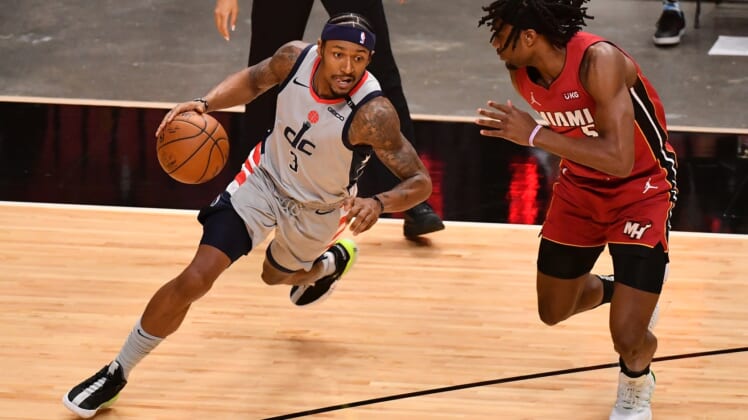 Miami Heat rumors: The Miami Heat suffered their worst loss of the season on Wednesday night as they dropped to 7-14 with a low 35 points in the second half against the Washington Wizards. The Heat have now lost two straight games and are trending in the wrong direction as the season starts to pick up steam.

There are many holes in this roster right now, most significantly at the power forward position. Rumors that the Heat never intended to come into the season with these holes also came out a few days ago. It’s clear this roster needs to be reshuffled as the Heat front office could be nearing panic mode.

Here are three trades that could reshuffle what is currently a stagnant Heat team.

Bradley Beal has been at the subject of trade rumors for months as his Wizards team has struggled to secure wins, even with new addition Russell Westbrook. However, reports have claimed Beal does not want a trade from Washington at this time and still wants to win a championship there.

What if this changes before the trade deadline and Miami turns it around with a small move before then? The Heat have loved Beal for years now and he remains the top target for the team. There would be many suitors, but any deal would have to include a majority of the young players.

There are many things to dissect here, including Robinson to the Celtics, but let’s start off with the package. Miami would send out Herro and Achiuwa as the centerpieces of the deal. Olynyk and Iguodala are cap fillers and must be included in a deal to make this deal possible.

The Heat would need to trade a 2022 second-round pick to the Thunder, so they lift the restrictions on Miami’s 2023 first-round pick that they own. They would also need to receive three to four players along with Beal since this would be during the season. Brown Jr. and Wagner could be rotational pieces as well.

Heat fans may not be happy with Robinson heading over to Boston, but Miami really needs to consider whether bringing him back in the 2021-2022 season is a good idea. NBA officials expect Robinson to earn $15-20 million per year on his next deal this offseason.

That may be too much for Miami and flipping him to a contender to gain another first-round pick is a good idea for completing a deal. The Miami Heat starting lineup could look similar to this: Kendrick Nunn, Bradley Beal, Jimmy Butler, Mortiz Wagner, Bam Adebayo.

While trading for Beal is very unlikely during the season, it will still be Miami’s goal to land the NBA’s leading scorer.

Despite Oladipo’s trade to the Houston Rockets, he still eyes the Miami Heat as his end destination. The feeling wasn’t that mutual during the offseason, but Oladipo and the Heat could be the perfect match for each other at this point as both want to contend for championships and wins.

Oladipo is averaging 20.0 points, 5.7 rebounds, and 4.2 assists while shooting 42.1% from the field. He has been one of the Rockets’ best players since he landed in Houston and has broken the 20 point barrier all but three times with the team.

The Heat would benefit from trading Robinson to a contender once again in this deal. The main part of the deal for Oladipo would be Kendrick Nunn, who they could try to develop, Andre Iguodala, and Kelly Olynyk. This could be a good deal for the Rockets as they could flip Iguodala for another first-round pick.

Robinson would land with the Warriors and become Stephen Curry’s partner in crime this season as they look to contend. In return, they’d send the Rockets a first-round pick, which Miami may be unwilling to trade for Oladipo.

There’s a lot to love about the other pieces Miami receives too. McLemore could be another shooter off the bench, while Nwaba can bring added defense for games where offense isn’t the main focus. The Miami Heat starting lineup could be: Tyler Herro, Victor Oladipo, Jimmy Butler, Moe Harkless, Bam Adebayo.

This would be the dream for the Miami Heat during the season. Oladipo wants to come to Miami and become a staple of the culture. The Heat should take the guy who desperately wants them and the player they may desperately need too.

John Collins may be the most unlikely one of the bunch, but there is definitely a reason for both the Heat and Hawks to make a deal. Collins would be an exceptional fit next to Bam Adebayo and the Hawks would players in the deal to help make a playoff push this season.

The 23-year-old has also shown his unhappiness with the way his teammate Trae Young has run the offense. Collins is averaging 17.8 points, 7.9 rebounds, and 1.6 assists while shooting an efficient 56.0% from the field.

Playing for the Miami Heat would be a “dream come true” for John Collins, who had Dwyane Wade jerseys hanging in his closest prior to the NBA Draft and the ultimate respect for Pat Riley. Collins grew up a Heat fan and went to games at AmericanAirlines Arena as a kid.

Here’s how the Heat can make Collins’ dream a reality.

It may not seem like much at first, but if John Collins doesn’t want to be there and would want to force his way to Miami, this would end up being a good deal for both sides. Robinson returning could be unlikely, so he could be paired with Trae Young and the Hawks could be willing to pay him $15-20 million per year.

Nunn has shown flashes of last season’s Rookie of the Year runner-up and would land in a spot where he could be used off the bench as the back-up point guard instead of Rondo when Atlanta wants to score.

Just as the Beal trade, the Heat would need to trade a 2022 second-round pick to the Thunder so they lift the restrictions on Miami’s 2023 first-round pick that they own. This would definitely be worth it as Miami could get Collins on a discount of sorts.

Collins would be an excellent fit next to Adebayo and Goodwin would be another body off the bench in case of COVID-19. There are many things to like here for both teams as they push for the playoffs this season. The Miami Heat starting lineup could be: Tyler Herro, Jimmy Butler, Moe Harkless, John Collins and Bam Adebayo.

The Heat are clearly not going to be able to function as a true contender this year without a move and these moves would do wonders for them as they look to return to the NBA Finals.