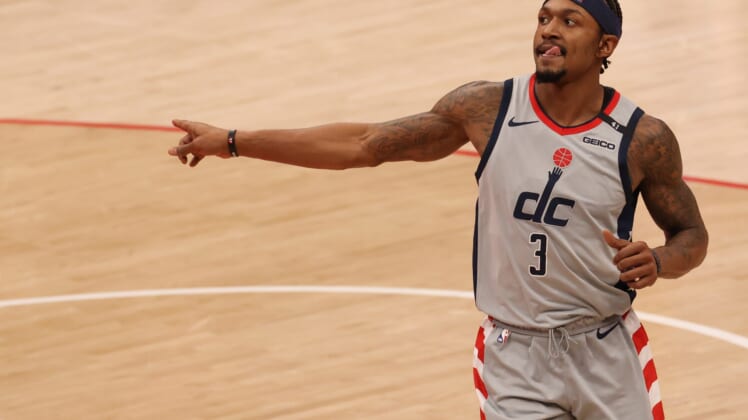 Washington Wizards superstar Bradley Beal has been the unwavering subject of trade rumors, but reliable buzz coming out of the nation’s capital suggests neither he nor the team have any plans to trade him.

Beal is in the midst of a phenomenal individual 2020-21 season, yet the Wizards are among the worst teams in the NBA with a 4-12 record. That doesn’t seem to be factoring into a possible trade, though.

According to Shams Charania and Fred Katz of The Athletic, both Beal and the Wizards front office are determined to build a winner in Washington:

“Beal has so far expressed he wants to remain in Washington and has not indicated he prefers to be traded…The Wizards, in turn, have no interest in trading him. […] He’s infatuated with Dirk Nowitzki’s sole title in Dallas, which came during year 13 and after seasons of battling for the organization that drafted him.”

That last point about Nowitzki and the Dallas Mavericks is fascinating. In an era where many superstar players are bailing to form alliances with other world-class talents, Beal is sticking it out in D.C., regardless of the unsavory circumstances around him at present.

Why Bradley Beal can lead Washington Wizards to a championship

COVID-19 tends to favor teams with continuity and those who haven’t been impacted by the virus. Washington has attempted to break in a ball-dominant star in Russell Westbrook alongside Beal, and there hasn’t been much time for the two to get on the same page. Also, the Wizards’ schedule got postponed for a lengthy period of time due to a COVID-19 outbreak within the team.

Criticism is fair up to a certain point for this Washington squad. However, unforeseen difficulties and a lack of time to get Westbrook and Beal on the same page — amid a shortened 72-game season, no less — are legitimate factors at play that have hampered the Wizards in 2020-21.

If Washington winds up as one of the NBA’s worst teams, the silver lining to that is a high spot in the NBA draft lottery. Provided both Beal and Westbrook stick around for next season, there could be another transcendent talent coming the Wizards’ way in the 2021 NBA Draft.

Rookie Deni Avdija has shown promise in limited action during his maiden NBA campaign and could take a big step forward in Year 2. Washington also has another promising young player in Rui Hachimura to help its rebuild.

The scary thing about Beal’s game is, he just seems to be getting better in recent years. As of this writing, Beal leads the league with 34.9 points per contest, is a capable creator off the dribble as a distributor and plays excellent defense on the perimeter. That all-around skill set doesn’t come around very often, and it’s why the Wizards are so committed to him.

With a marquee addition in the upcoming draft, a couple savvy free-agent signings and more time for Beal and Westbrook to establish chemistry, Washington could be primed for a monster season in 2021-22. But with the COVID-19 situation blowing over and the Wizards notching a huge victory over the Brooklyn Nets, don’t count them out this season just yet.