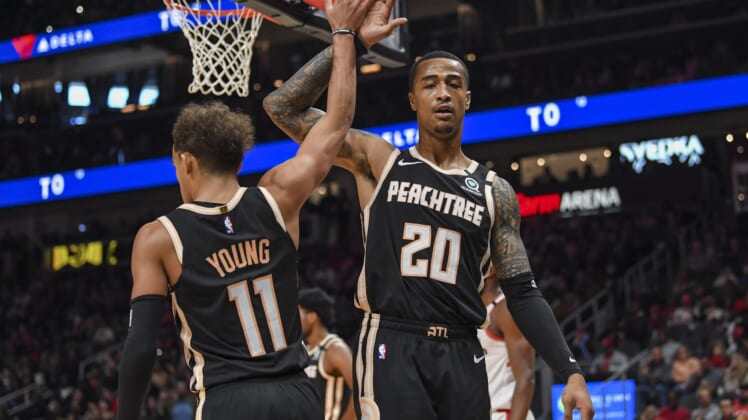 The Atlanta Hawks made NBA news this offseason with big moves to build around All-Star point guard Trae Young and rising forward John Collins. Now, two of the team’s biggest foundational pieces and keys to their success in the 2020-’21 NBA season are having issues.

Things started well in Atlanta, with the team rolling out to a 4-1 record after a New Year’s Day victory over the Brooklyn Nets. However, tensions seem to be escalating amid a three-game losing streak, even before the team suffered a 102-94 defeat to the Charlotte Hornets.

Now, sitting at a 4-4 record, the Hawks will enter Saturday’s rematch with Charlotte needing to get their on-court struggles and chemistry issues solved quickly.

According to The Athletic’s Chris Kirschner and Sam Amick, John Collins spoke out about his issues with how Young ran the team’s offense. The 23-year-old reportedly didn’t hold back, calling out his All-Star teammate for how the team operated with Young at the helm.

Specifically, Collins highlighted the need for the team to get into its offense sets faster and directed blame at Young for early shot attempts that isolate his teammates from the action. Furthermore, Collins expressed to be more involved in the offense and wanted to get more opportunities to help his team.

The direct criticism of Young reportedly surprised the team, but there was no confrontation between the two during the film session. However, per The Athletic, Young later told teammates that he strongly disagreed with his teammate’s analysis of how the offense was run.

Collins hit 8-of-15 shots in 33 minutes during Monday’s loss to the Knicks. Following his criticism of Young, he hit 9-of-16 shots, but didn’t have a three-point attempt for the first time this season. Across 32 minutes in Wednesday’s defeat to the Hornets, he finished with 23 points, 11 rebounds and just one assist.

Meanwhile, Young had his worst performance of the season. He scored just seven points, hitting 22.2% of his field-goal attempts, and had seven turnovers in 35 minutes. Over the last two contests, Young has given the ball away 15 times.

With the moves made in the offseason, the expectation is for the Atlanta Hawks to make the NBA Playoffs. The team added Danilo Gallinari, Bogdan Bogdanovic and Rajon Rondo to bolster its depth. Early in the season, though, things aren’t clicking for this team.

Collins downplayed the confrontation to The Athletic, saying, “Trae is my brother regardless.” Both young stars could easily put these issues behind them, but there is also a lot at stake for both.

Atlanta signed Bogdanovic and Gallinari to huge contracts this fall, so there’s only so much money to go around. Young is the clear priority for a long-term extension, which leaves Collins to bet on himself rather than taking a team-friendly deal. Set to be a restricted free agent following the season, Collins needs a career-best season to cash in with his own payday.

The Hawks will get a shot at revenge against Charlotte on Saturday, with a 7 PM EST tip-off. We’ll have to see if this team bounces back and if both players can solve their on-court communication issues.