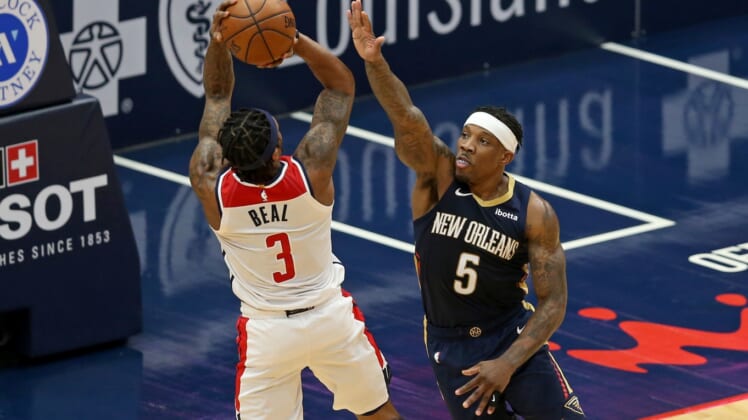 Washington Wizards star Bradley Beal is the next NBA star that every contender is eyeing on the trade market. While the trade deadline might be a few months away, chatter is already heating up about potential landing spots for Beal.

Even before the Harden trade, executives across the NBA started turning their focus to Beal. The All-Star guard is enjoying the best season in his incredible career, but the Wizards sit at the bottom of the NBA standings. With Washington destined for a top pick in a loaded 2021 NBA Draft class, speculation began about when the league’s top scorer would be moved.

Washington’s general manager Tommy Sheppard has said for months that there are no plans to trade Beal. However, it’s evident this is one of the NBA’s worst teams and Beal is becoming more frustrated  As a result, it’s likely only a matter of time before the 27-year-old asks for a trade.

Related: Bradley Beal, NBA stars who could be traded next

Let’s dive into the most realistic landing spots and packages for a Bradley Beal trade.

The Philadelphia 76ers missed out on James Harden. Falling short of an NBA MVP, the kind of player who could take this team to new heights left many fans in Philadelphia feeling disappointed. Frankly, Ben Simmons might be the only one happy a deal didn’t go down. He shouldn’t get too comfortable. Team president Daryl Morey is willing to make a blockbuster trade and if the opportunity to acquire Beal presents itself, he’ll jump at the opportunity.

For the Wizards, a team with atrocious defense, this deal changes a lot of things. Simmons draws plenty of criticism for his game, but this is also a 24-year-old with consecutive All-Star appearances. He is also one of the NBA’s best defenders, earning All-Defensive First Team honors in 2020. While he lacks Beal’s star appeal and scoring prowess, his defense would be huge for this team.

Of course, Simmons alone won’t get it done. Emphasizing defense, Thybulle is another player Washington could target. The No. 20 overall pick in the 2019 NBA Draft, Thybulle would add much-needed defense along the wing. Many believe he could blossom into a Defensive Player of the Year candidate, which would help reshape a new look in Washington. Add in a first-round pick in a talent-rich draft class and the Wizards can walk away feeling good about their future.

The Dallas Mavericks know they need another star to create a “Big Three” with Luka Doncic and Kristaps Porzingis. They looked into Zach LaVine this offseason, but nothing ever came of it. As for Harden, the organization seemingly wasn’t interested in putting him around Doncic. If Beal wants out of Washington, he could be the perfect guy Mark Cuban wants to pair with his superstar.

Hardaway Jr. helps the salaries match and is on an expiring contract, granting the Wizards some cap relief moving forward. Kleber, under contract through 2022 for $8.75 million AAV, could provide a starting option at center following Thomas Bryant’s torn ACL. While the 28-year-old doesn’t project as a long-term starter, he would provide nice depth for Washington.

The key here, if Washington wants to launch into a complete rebuild, is the first-round picks. Spreading the unprotected draft picks out follows the Ted Stepien Rule and bets on the Mavericks’ core not lasting for too long. It’s the same kind of gamble the Houston Rockets are taking on the Brooklyn Nets and the Oklahoma City are doing with practically half the league.

Terry would also be a nice addition for the Wizards. The No. 31 pick in this past NBA Draft, he drew some comparisons to an enhanced Seth Curry. He knows how to create shots and handles the basketball well, while also offering limitless range as a shooter. He’d get plenty of minutes in Washington and offers the potential to blossom into a starting guard.

Pat Riley pulls off another blockbuster trade for Miami Heat

The Miami Heat showed plenty of interest in Harden, but Houston’s asking price drove them away. It’s hard to blame Pat Riley for passing on Houston’s demands for Tyler Herro, Duncan Robinson, Precious Achiuwa, Kendrick Nunn and numerous first-round picks. While a blockbuster deal didn’t come together, we know the Heat are still willing to make a huge move. Besides, Beal might be an even better fit.

In order to even join the conversations for a Bradley Beal trade, a package needs to include Herro and multiple first-round picks. While Riley is reluctant to trade Robison, the Nets’ blockbuster move might compel him to feel a little more pressure in the Eastern Conference. Beal can be Miami’s primary scorer and there are far fewer questions, compared to Harden, regarding his ability to fit into any offense.

The Heat also need a spark. While COVID-19 absences are largely to blame, a 6-11 record is the last thing this franchise expected after reaching the NBA Finals a few months ago. Of course, trading for Bradley Beal is about more than just making the jump into an actual playoff seed. Keeping him away from the 76ers would be a monumental move for Miami in the Eastern Conference.

For the Wizards, the rebuild starts with this deal. Herro becomes their shooting guard of the future and Robinson can provide some outstanding three-point shooting. Nunn could start in place of Russell Westbrook, who is sidelined indefinitely with a quad injury. If Washington lands Cade Cunningham in the 2021 NBA Draft, Nunn can make an impact as the top guard off the bench. Meanwhile, three first-round picks will provide the Wizards with long-term assets for a multi-year rebuild.

In the NBA bubble, the Denver Nuggets proved they are a star away from being a perennial problem for championship contenders. Nikola Jokic continues to blossom as one of the league’s best big men and one of the greatest passers for his size in NBA history. While Jamal Murray isn’t playing at bubble level, the 23-year-old is still a fantastic player. Now, if only the Nuggets could find a co-star at shooting guard.

Denver inquired on Beal before the 2020 NBA Draft and dipped their toe in the water for Harden. Between the two stars, Mike Malone would likely prefer Beal. Given his fit with the team and the likelihood he wouldn’t cause any issues for coaches or inside the locker room, Denver might actually be willing to move Michael Porter Jr. in this instance.

MPJ offers All-Star potential, the kind of player who Washington can build its team around. Meanwhile, Bol Bol gives the Wizards a developmental player who offers tremendous two-way potential. He brings a sky-high upside to the table, but everything needs to go right for him. Add in two first-round picks and the Wizards can start building towards a better future.

David Griffin has built a war chest of draft picks since taking over the New Orleans Pelicans. Frankly, it’s quite absurd to look at their collection of future picks. With 12 first-round picks through the 2027 NBA Draft, New Orleans can afford to go after any star that becomes available. Given this team’s outlook and the potential availability of Beal before the NBA trade deadline, the time to strike could be approaching.

Imagine Beal alongside Zion Williamson. Through 13 games, Beal is averaging a career-high 35.4 points per game and seems to be taking his game to another level. He is one of the league’s best at getting to the line, hitting 88.5% and averaging nearly nine free-throw attempts per game. On top of that, he is shooting a career-best 49.4% from the field and is effective from deep with a 36.6% rate from beyond the arc.

Besides, the Pelicans need to make changes. Lonzo Ball isn’t working out in the new system and this team lacks a great scoring threat to take pressure off Brandon Ingram and Zion. Sitting at 6-10, Beal would help New Orleans get things turned around quickly. Given this team is jsut a few games back of the No. 8 seed, the NBA Playoffs are still easily within reach.

While five first-round picks is expensive, that’s the price of landing an NBA star. Besides, the Pelicans would likely be a contender in 2023 with Beal and a more developed Zion Williamson. Lonzo Ball is a talented guard, but headed for restricted free agency this offseason and New Orleans is much better off devoting that money to a true star.

Despite Klay Thompson’s absence and Draymond Green’s early injury Steph Curry kept this team afloat. Green’s return has certainly helped the Warriors, who currently hold the No. 6 seed, but Curry needs another great shooter on the floor. Fortunately, Golden State has the assets to make something happen.

Imagine Beal, Curry and Green on the floor together. Opponents can’t double Curry, because he’ll just pass it to Beal to set up an easy bucket. Both guards could also play off-ball and Green would be given even more options as the facilitator on the court. This is the moment to take advantage of the remaining window the Warriors have left with Curry (32) and Green (30).

Plus, imagine this team next season. If Thompson is healthy, he can shift to the forward. All three of these guys together on the court makes this team impossible to stop. There are just too many lethal shooters, helping the Warriors become title contenders once again.

As for Washington, it gets a building block in Wiseman. While the 19-year-old still needs time to develop, the talent exists to be a perennial All-Star center. Plus, the Wizards land Minnesota’s 2021 first-round selection. The Timberwolves should improve enough when Karl-Anthony Towns returns for that pick to be given to Washington. In a loaded 2021 NBA Draft class, that means another potential star to pair with Wiseman. Plus, with Washington having its own top-three pick, this rebuild could yield incredible returns rather quickly.