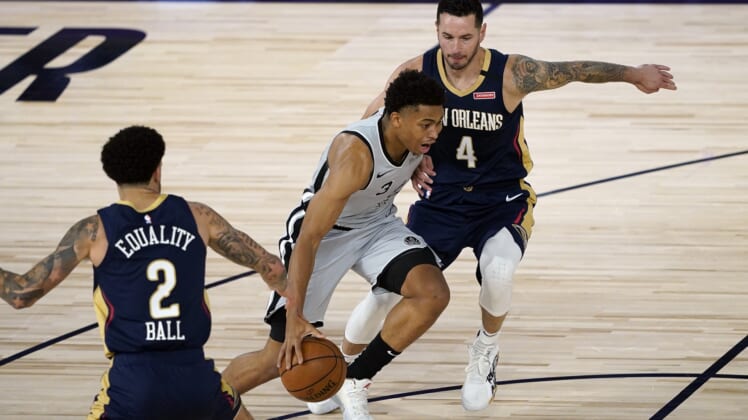 At 5-10 on the season, the New Orleans Pelicans are off to a horrible start. It will lead to NBA rumors ahead of the March trade deadline suggesting that New Orleans could sell off some veteran assets.

We have already discussed the possibility that New Orleans could move off former No. 2 pick Lonzo Ball after less than two full seasons with the team. Veteran sharpshooting guard JJ Redick also remains a possibility.

Shams Charania of The Athletic focused on these two potential trade chips in a recent column. What he had to report was rather interesting.

“A team that is expected to be prominent in the trade market picture, rival teams expect: The New Orleans Pelicans. The franchise is off to an uneven 5-10 start to the season,” Charania reported. “New Orleans has been receiving calls about the availability of Lonzo Ball and JJ Redick and has shown an openness to discussing trades around both with interested teams.”

The idea here would be to get young guards Nickeil Alexander-Walker and Kira Lewis more playing time for a team that’s unlikely going to challenge for a playoff spot moving forward on the season.

Specifically, Alexander-Walker has shown promise as a sophomore. He’s averaging 11.0 points on 45% shooting from the field in just 20 minutes of action per game this season.

As for NBA rumors linking Lonzo Ball to a trade, it makes sense. He’s slated to become a restricted free agent next summer. The two sides have failed to work out a long-term deal. In addition to this, Ball has regressed this season. The 23-year-old guard is averaging 12.0 points, 3.8 rebounds and 4.7 assists on a mere 39% shooting.

Redick, 36, could be of interest to contending teams. While he’s averaging a hair over eight points on what would be a career-low 30% shooting from distance in 2020-21, the former Duke star has shot 41% from three-point range since entering the NBA back in 2006.

As the Pelicans continue to struggle finding the right mix with Brandon Ingram and Zion Williamson, it’s becoming clear that they have to pull off a couple trades ahead of the March 25 deadline. Ball and Redick remain the two-likely options.

The backdrop here is Charania reporting that New Orleans has had discussions with Golden State Warriors wing Kelly Oubre.

“The Warriors and Pelicans discussed a potential deal involving Kelly Oubre Jr., sources said. There isn’t traction as of yet. Like many conversations around this time, it is a scenario,” the NBA insider noted.

Golden State acquired the 25-year-old Oubre from the Memphis Grizzlies this past offseason using the Andre Iguodala trade exception. After initial struggles shooting the ball, the solid all-around wing has picked it up in recent games for the 9-8 Warriors.

The impending free agent is averaging 13.5 points and 5.4 rebounds over the past eight games. He’s also played some tremendous defense throughout the season. Despite that, Oubre’s 36% shooting from the field has to be cause for alarm.

Golden State yielded a protected first-round pick to acquire Oubre from Memphis during the offseason. Given the team’s status as a playoff contender, it stands to reason that the Warriors would want a veteran in return. That’s where both Ball and Redick might come into play.