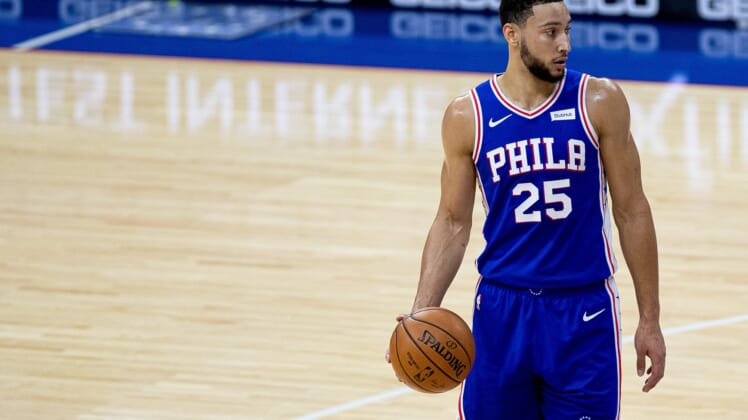 The Philadelphia 76ers were reportedly willing to include Ben Simmons in trade talks with the Houston Rockets for James Harden prior to the latter being dealt to the Brooklyn Nets earlier in the week.

This piece of information runs contrary to public stance from 76ers front office head Daryl Morey indicating that Simmons was untouchable. Only when Houston demanded stud rookie Tyrese Maxey and multiple first-round picks in addition to Simmons did Philadelphia opt to pass.

We’re now hearing some more information form those connected around the NBA. One unnamed Eastern Conference executive did not mince words when talking about Simmons and his 76ers.

“I think Philly missed an opportunity and now is stuck being in the middle of the East,” one Eastern Conference executive told Michael Scotto of Hoops Hype. “They’re not as good as Brooklyn, Milwaukee, Boston, and in the end, Miami. They might just be a No. 5 seed by end of the season. Ben Simmons has not improved in one area of his game at all since coming into the league. He’s the same player today as he was in his rookie year, and teams have figured him out in the playoffs. He’s why they won’t go far.”

Despite some brilliant play from Joel Embiid thus far this season, the executive really is not wrong with this sentiment. The Nets’ acquisition of Harden changes the dynamic in a big way.

Meanwhile, Boston’s big two of Jayson Tatum and Jaylen Brown have stepped up big time. You can’t discount Giannis Antetokounmpo and the Bucks or even the defending Eastern Conference champion Miami Heat. With that said, the executive’s take on Simmons would on the surface seem to be hot. It’s not.

Ben Simmons has not improved with the Philadelphia 76ers

It was just last season that then-Sixers head coach Brett Brown put Simmons on blast for an unwillingness to expand his game on offense. Sure Simmons is a tremendous defensive player and ball distributor.

But his game has not improved since the 76ers made him the No. 1 overall pick back in 2016. The numbers back this up in a big way.

As you can see, most of Simmons’ numbers are down from a season ago. In fact, he’s on pace to average career-lows in terms of points, assists and shooting percentage. That’s not what the Philadelphia 76ers had in mind entering his fourth season in the NBA.

Where do the 76ers go from here with Simmons?

It seems to be pretty clear that rival executives do not view Simmons in the same light as Daryl Morey in Philadelphia. That could complicate things if the team were to move on from the All-Star.

Simmons is still only 24 years old. He still boasts untapped potential. The issue here, as noted above, has been an inability to improve his game on offense. Morey sees the potential. Others see a player in Ben Simmons who has already hit his ceiling.

Related: 5 stars who could be traded after James Harden

As for the 76ers as a whole, it’s hard to imagine them competing with the big boys back east short of Simmons somehow drastically improving as the season progresses. As good as Embiid has been this season, he simply doesn’t have enough help. It will lead to trade talk ahead of the deadline in March. Take that to the bank.