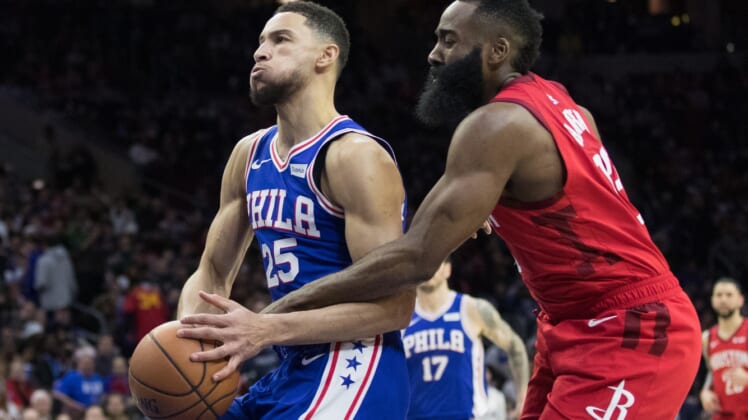 NBA rumors started to ramp up big time earlier on Wednesday as it relates to a potential James Harden trade from the Houston Rockets. That came after a drama-filled evening in Houston concluding in Harden indicating that the situation was not salvageable.

In pretty quick fashion (by NBA standards), a trade ended up coming together. It did not include one of the teams interested in Harden, the Philadelphia 76ers.

Rather, Harden was dealt to the Brooklyn Nets in a four-team trade that included other notable names such as Victor Oladipo and Jarrett Allen. Houston received four future first-round picks and four pick swaps in one of the biggest blockbuster trades in NBA history.

We now have some more information on the 76ers’ reported interest in a James Harden trade. It’s rather fascinating stuff, ladies and gents.

NBA rumors had previously indicated that Philadelphia was willing to part ways with Simmons in a Harden trade. However, front office head Daryl Morey pushed back against that belief.

As for the 76ers’ reported trade package, Simmons and Matisse Thybulle would have headlined the package heading back to Houston. Said package would have also included multiple first-round picks. However, it seemed to fall apart once the Rockets asked for stud rookie guard Tyrese Maxey.

Instead, the Rockets settled on an expiring contract in that of Oladipo and four future first-round selections. The four pick swaps with Brooklyn was also a big part of the Harden trade.

NBA rumors: What all of this means for Ben Simmons?

There’s a chance that Simmons is not happy about being the subject of trade talks surrounding Harden. That could very well make things a bit awkward for the former No. 1 overall pick and his organization.

Given that Philadelphia was apparently willing to offer up Simmons, it stands to reason that he might be on the move ahead of the March NBA trade deadline.

While there’s no one of Harden’s ilk on the trade block, someone like Bradley Beal could make sense for Philadelphia in a hypothetical Simmons deal.

Simmons, 24, is averaging what would be a career-low 12.6 points to go with 8.5 rebounds, 7.5 assists and 1.5 steals on 52% shooting from the field. It has not been a great start for the talented player under new Sixers head coach Doc Rivers. Perhaps, that played a role in Simmons being bandied about in Harden trade talks.

For now, there’s really nothing concrete on the Simmons’ front outside of the fact that he’s said to be ecstatic about remaining in Philadelphia and not heading to a drama-filled Rockets organization.

As for the 76ers, they sit at a surprising 8-4 on the season after a premature exit from the playoffs following the 2019-20 campaign. The expectation here is that Daryl Morey will pull off a deal ahead of the March trade deadline. It just won’t be on the same level as the Harden blockbuster.