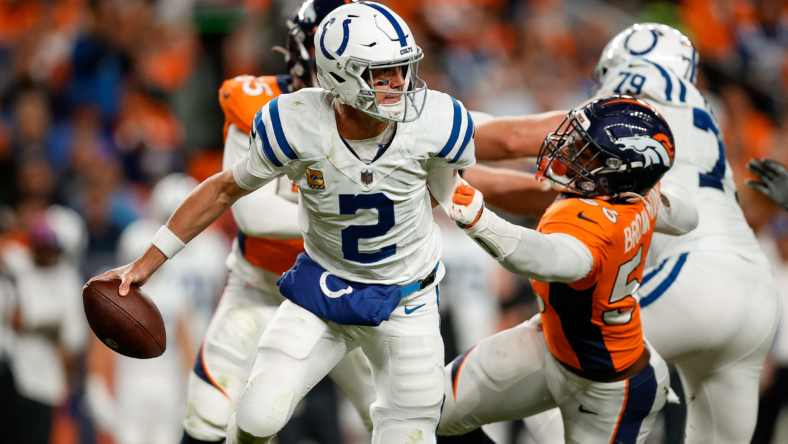 Jeff Saturday has had himself a whirlwind past few days after being named the Indianapolis Colts interim head coach. Veteran Matt Ryan now finds himself in the midst of the drama that is currently taking place in Indy.

Ahead of Sunday’s game against the Las Vegas Raiders, it was noted that Ryan was taking reps with the first-team offense while current starter Sam Ehlinger was given reps with the backups.

Then, immediately ahead of kickoff, the Colts made the decision to go with Ryan as their starting quarterback for the Week 10 affair.

To say that this is a surprising development would be an understatement. Former Colts head coach Frank Reich opted to bench Ryan back in Week 8. It was a decision that general manager Chris Ballard and owner Jim Irsay backed.

Within a couple weeks, Reich was given his walking papers and headed to the unemployment line. Even then, it seemed to make sense for the 3-5-1 Colts to stick with Ehlinger under center. Saturday opted to go in a different direction.

Why did Jeff Saturday turn to Matt Ryan?

With no coaching experience at either the college or professional level, Saturday was a surprise hire of the Colts. He starred for the team from 1999-2011.

He’s considered an all-time great player in franchise history. Even then, the process that led to Indianapolis naming him its next head coach was pretty darn confusing. Irsay’s press conference making the move official added another layer to this.

“He doesn’t have that fear. We were very fortunate he was available. He has tons of experience. He knows this game inside and out,” Indianapolis Colts owner Jim Irsay on the hiring of Jeff Saturday.

Meanwhile, Irsay talked about how building a football team is different than cooking sausage and the fact that it is not similar to going to Mars. Yeah, that was an interesting press conference.

As for Matt Ryan, the aforementioned Reich announced back in Week 8 that Ehlinger would be the starter for the remainder of the season. It’s interesting that the Colts’ brass allowed Saturday to flip the switch after he campaigned to go back to Ryan.

In the two games with Ehlinger starting, Indianapolis has scored a total of 19 points. It is coming off a disastrous 26-3 loss to the New England Patriots, which acted as the death knell for Reich. It will be interesting to see how things go for Indy against an equally hapless Raiders squad in Vegas Sunday afternoon.