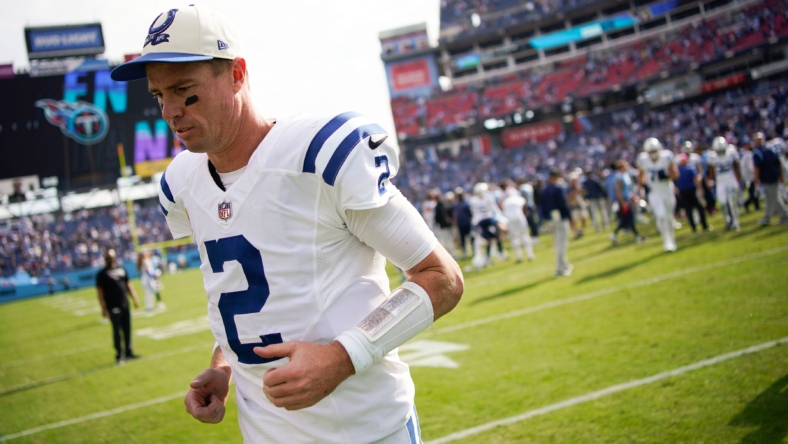 The Indianapolis Colts have shocked the football community on several occasions already this season. First, it was the decision to bench former NFL MVP Matt Ryan while handing the keys to the offense to second-year pro Sam Ehlinger.

Next up came the decision to fire head coach Frank Reich after a disappointing 3-5-1 start to their season. But the most shocking move of all came by choosing Jeff Saturday to take over the helm, despite their new coach having never led a team past the high school level.

Yet, even Saturday can already realize Ryan gives this roster the best chance to win, not former sixth-round pick Ehlinger. While evaluating the performance of any QB right now in the Colts offense is tough to do, thanks to a lackluster offensive line in addition to a pass-catching corps that lacks playmakers, Ryan is still the best man for the job.

Now, according to FOX’s Jay Glazer, Saturday has been trying to convince the Colts leadership group to go back to Ryan as the team’s starting quarterback. Some theories have suggested the Colts pulled Ryan from the lineup due to having $17 million that can become fully guaranteed to him in 2023. The line of thought behind this theory is by holding Ryan out, he can’t get hurt, thus allowing the Colts to walk away from a decision they regret.

Nevertheless, Saturday wants to make a good impression, not only on a roster he now leads but also among a fanbase that’s growing restless.

For now, Ehlinger gets a chance to make his third career NFL start on Sunday against the Raiders, but there’s a growing sense if he doesn’t thrive, it could be his last time in the starting lineup this season. The Colts also have Nick Foles on the roster as well.