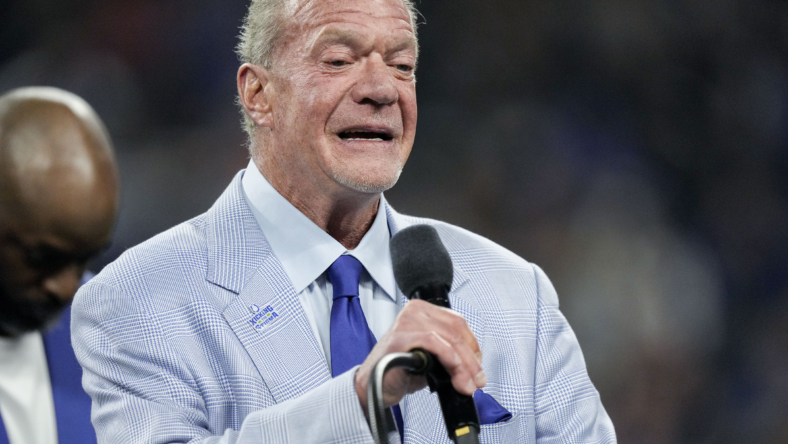 After making the not-so-surprising decision to relieve head coach Frank Reich of his duties following another bad loss, the Indianapolis Colts made perhaps the most shocking hire in NFL history with Jeff Saturday.

Just hours after this baffling move, Colts owner Jim Irsay had to face the music in the form of a press conference with the local Indianapolis sports media on Monday night. While the initial media session was set for 6 PM ET, it was eventually delayed to 7:30 and then 8 PM.

Yet, even though the PR team did their best to avoid the inevitable, eventually, the Colts had to start explaining themselves or at least trying to.

But, as you can imagine, once the spectacle got underway, the actual execution went about as well as the current Colts’ 3-5-1 season.

Here are only a few of the gems from Irsay’s coaching change press conference on Monday night.

Irsay has owned the Colts since 1997, when his father, Robert passed away. They have experienced just five losing seasons in the 24 years since, peaking with a Super Bowl victory with Tony Dungy and Peyton Manning in 2006. But ever since Andrew Luck suddenly retired after 2018, the team hasn’t been able to establish sustained success.

Still, Irsay is confident in his process, so much so that he’s willing to hire a former member of the team, in Saturday, who’s well respected, but also very, very inexperienced. In fact, Saturday has never coached above the high school level.

Trying to explain the decision is simply madness, but that didn’t prevent Mr. Irsay from trying his damnedest.

While most interview processes would likely typically focus on someone who’s a bit more qualified, the Colts said screw logic. Let’s do this instead.

“He doesn’t have that fear. We were very fortunate he was available. He has tons of experience. He knows this game inside and out.”

While Colts general manager Chris Ballard noted the team did try to hire Saturday on two separate occasions, those offers were only to coach the team’s offensive line instead of an entire NFL franchise.

We couldn’t have said it any better than Saturday himself, “Why am I a candidate for this?”

A proper answer would have been: You aren’t. At least not currently. Then again, the Colts aren’t currently anything resembling a football team trying to win football games in 2022. So, why not?