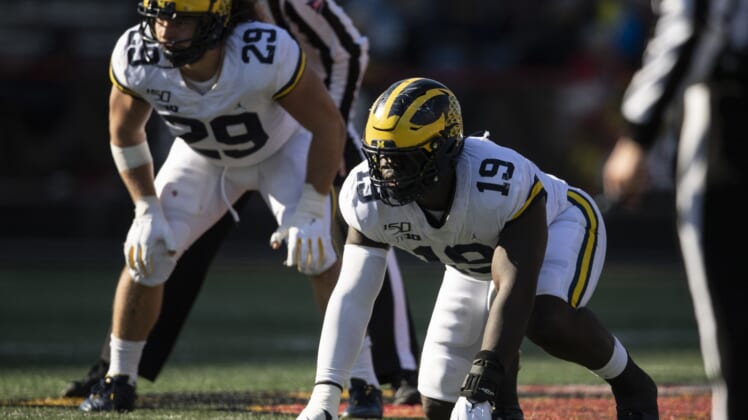 Top defensive prospect and Michigan star edge rusher Kwity Paye is collaborating with OpenSea to release an NFT featuring his likeness. Once Paye is selected in the NFL Draft, the digital collectible can be purchased on the OpenSea marketplace.

However, interested bidders may have a lot of competition as the release is a 1-of-1 item. And they may have to act quickly, as the digital asset is expected to be live the moment Paye is selected Thursday night.

Proceeds from the sale will go to Paye’s non-profit, The Uniform Funding Foundation. Just as the name suggests, the TUFF organization is described on their Twitter as an org “looking to outfit youth teams in need with the highest quality uniforms and gear”.

Not a bad way for the former Michigan Wolverine to start his NFL career.

The 18th-ranked player on Sportsnaut’s NFL Draft Big Board, Paye is a bit of a mystery heading into Thursday’s event. Our final mock placed him exactly at pick 18 and most projections have the defensive end going in the middle of the first round.

With plenty of teams in need of adding a pass rusher, all it takes is one to fall in love with Paye as a prospect.

While Paye’s release is expected to be the first collegiate licensed football NFT, fellow draft prospect Zach Davidson is believed to have been the first to release NFT collectible artwork. Davidson’s collection was also available through the OpenSea marketplace.

NFL’s version of digital trading cards could be near

While basketball has NBA Top Shot and baseball has Topps digital collectibles, the NFL has yet to publicize any official non-fungible token plans for football.

However, several reports suggest something is in the works. Some photos have even circulated of unreleased collectibles on the VeVe marketplace, showing the NFLPA logo and little else.

We may have to wait a little longer to discover the NFL’s version of NFT’s, but it appears digital sports memorabilia collectors may not have to wait long. If not during or shortly after the draft, expect a digital trading card announcement to come soon for football fans.