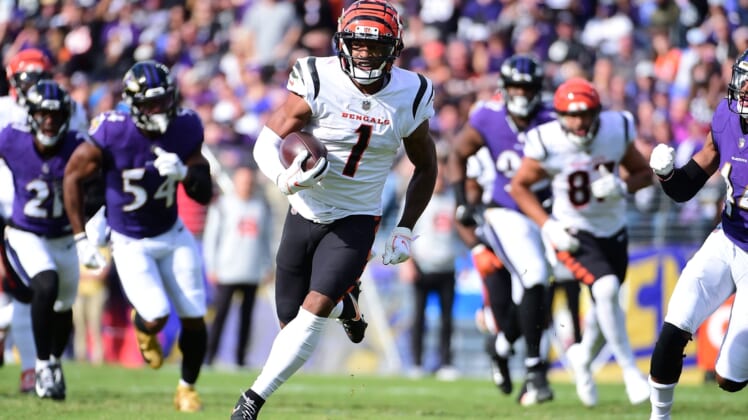 Ja’Marr Chase and the Cincinnati offense sparkled while the defense did enough to contain Lamar Jackson as the Bengals took over first place in the AFC North with a 41-17 win over the host Baltimore Ravens.

Joe Burrow threw for a career-high 416 yards and three touchdowns and the rookie Chase caught eight passes for 201 yards, including an 82-yard touchdown. Tight end C.J. Uzomah had 91 receiving yards and two touchdowns for Cincinnati (5-2).

Jackson completed 15 of 31 passes for 257 yards and a touchdown and led Baltimore (5-2) with 88 rushing yards. The Bengals sacked him five times on their way to halting the Ravens’ five-game win streak.

With the score 3-3 early in the second quarter, Burrow connected with Uzomah, who evaded Marlon Humphrey’s tackle en route to a 55-yard touchdown.

Baltimore responded with a drive that featured Jackson runs of 7 and 16 yards. Devonta Freeman capped the possession with a 1-yard touchdown plunge.

The Bengals pieced together a seamless two-minute drill with three completions to Chase and took a 13-10 halftime lead on Evan McPherson’s second field goal of the day.

The Ravens struck quickly right out of halftime. Jackson rolled out and hit Rashod Bateman for 35 yards. On the next play he connected with Marquise Brown, who kept both feet in bounds and hauled in a 39-yard TD in stride in the back of the end zone.

But Cincinnati needed only 2:14 to retake the lead for good. Burrow found Uzomah wide open on a go route to score his second touchdown, a 32-yarder, to go ahead 20-17.

On the Bengals’ next trip, Chase caught a pass in traffic, shed one tackle and spun away from another defender before sprinting away for an 82-yard score.

Joe Mixon, relatively quiet to that point, burst free for a 21-yard TD run to make it 34-17 with 9:32 to play. After stopping the Ravens on downs, the Bengals put it away when No. 2 running back Samaje Perine cut upfield for a 46-yard score.

It was Cincinnati’s first win over Baltimore since Sept. 13, 2018, ending a five-game skid.

Burrow, who completed 23 of 38 passes, has thrown multiple touchdowns in every game this year.