A matchup many expected in the AFC Championship Game a season ago, Baltimore seems to think that it is better equipped to handle the Chiefs’ high-flying offense. Unfortunately, the losses of Pro Bowl edge rushers Matt Judon and Yannick Ngakoue will lead to questions about that. This came out in droves in a Week 1 loss to the Las Vegas Raiders in which Derek Carr threw for north of 400 yards. What do you think Patrick Mahomes is going to do here?

Baltimore Ravens lose to the Las Vegas Raiders in overtime, 33-27

That’s an ugly loss for Lamar Jackson and the Ravens. They held a 14-0 lead midway through the second quarter, only to let Las Vegas back in the game and lose in overtime. Given the injury concerns these Ravens have and this season-opening loss, we’re concerned this could be a harbinger of things to come.

It just won’t be close. Detroit lacks the receivers to even make an honest entity out of the Ravens’ defense. Meanwhile, Jared Goff struggled against top-end defenses during the latter years of his Los Angeles Rams tenure. Add in Baltimore’s suddenly improved skill-position group with Sammy Watkins and rookie Rashod Bateman, and this should be a blowout.

With Teddy Bridgewater under center, the Broncos are going to have a ton of issues scoring against good defenses in 2021. This Week 4 matchup will magnify that with Denver’s solid duo at wide receiver in Courtland Sutton and Jerry Jeudy being snuffed out by Baltimore’s equally elite cornerback tandem.

How will Carson Wentz respond in his first season with Indianapolis after struggling big time a season ago in Philadelphia? Will former Chiefs Pro Bowl left tackle Eric Fisher be available in this one? These are two major question marks in what could be an AFC Playoff preview. With all of that said, the idea of Wentz being able to go tit-for-tat with Lamar Jackson is far-fetched. In what promises to be a close game, this should be the difference.

The Ravens have an absolutely brutal home schedule with six games against playoff teams from a season ago. That’s why they must take advantage of games against lesser competition. While the Chargers are vastly improved and boast reigning NFL Offensive Rookie of the Year Justin Herbert at quarterback, they just don’t have enough to go up against Baltimore at home and come away with a win in what should be a close game.

Simply due to the presence of Joe Burrow, Tee Higgins, and rookie No. 5 pick Ja’Marr Chase, there’s every reason to believe that the Bengals will be more competitive than we’ve seen in the recent past. Heck, four of Burrow’s seven losses before he went down with a torn ACL as a rookie were one-score affairs. While it won’t be enough to come out on top in Baltimore, this game should remain competitive.

One of just three home games against non-playoff teams from a season ago, Baltimore did not receive a great draw here. Kirk Cousins has proven to be a serviceable starter in Minnesota. Dalvin Cook is among the top backs in the NFL. Justin Jefferson is already a top-five receiver in the NFL. With that said, the Vikings’ lack of proven talent in the defensive backfield will be troublesome in this matchup. Go with Baltimore in what promises to be a close game.

Now, Miami is a team that could give the Ravens’ defense fits. If second-year quarterback Tua Tagovailoa takes that next step, the speed wide receivers Will Fuller and Jaylen Waddle bring to the table will be troublesome for opponents. Given the Ravens’ lack of speed in the defensive secondary, I am expecting Miami’s offense to do just enough to come out on top here.

The likes of Marcus Peters and Marlon Humphrey should be more than up to the task against a Bears offense that’s limited from a passing standpoint with Andy Dalton slated to start under center. Even with Chicago’s plus-level pass rush and some minor concerns along Baltimore’s offensive line, I am expecting a double-digit road win in this one.

The expectation here is that Cleveland and Baltimore will compete for the AFC North title in 2021. If so, the Ravens will have to at least earn a sweep of the division rivals. The good news for these Ravens? Cleveland has won just three of its past 26 matchups against Baltimore. Despite the Browns’ status as a legit title contender, that type of history is hard to ignore. 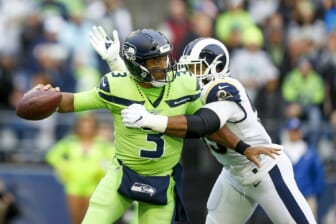 There’s just too many issues on both sides of the ball for Pittsburgh to compete with the top dogs in the AFC North. Despite the Ravens losing multiple Pro Bowl pass rushers during the offseason, the Steelers’ offensive line is going to be an issue in front of the immobile Ben Roethlisberger. That will lead to a rare home loss for Pittsburgh against a division opponent.

Will all due respect to Mike Tomlin’s Steelers, it’s going to be the Ravens and Browns competing for the AFC North title in 2021. Interestingly enough, Lamar Jackson and Co. destroyed Cleveland during their Week 1 outing in Baltimore by the score of 38-6 last season. The Browns responded several weeks later by making a close game of it in a high-scoring affair in Cleveland. We’re expecting the Browns to finally break through and win their first game against Baltimore since Week 4 of the 2019 season.

Even if Gus Edwards does well, losing Dobbins is a significant blow for the Ravens’ offense. Unable to control the clock as much, giving Aaron Rodgers more time with the football, this matchup shifts to Green Bay’s favor. It should still be a close battle, but injuries change a lot.

Baltimore swept Cincinnati a season ago, outscoring its divisional opponent by a combined margin of 65-6. While one of those games came without Joe Burrow under center, it tells us a story of two teams who are not near the same tier right now. Having won five in a row against the Bengals, we’re not expecting this to change come Week 16. However, it will be closer than most might anticipate in Cincy.

The presence of Matthew Stafford in Southern California changes the dynamics in a big way for the Rams. Primarily, he boasts a better-than-average ability to get the ball to stud receivers Robert Woods and Cooper Kupp. Going up against the Ravens in this Week 17 matchup, that could make all the difference in the world. If Stafford is able to have success against Marcus Peters and Marlon Humphrey, the Rams should be able to pull off the road upset in a high-scoring affair.

Legitimately one of the biggest rivalries in the NFL world, this Week 18 matchup should be all sorts of fun. Pittsburgh surprisingly swept Baltimore in their two-game set last season. That came after the Ravens swept their counterparts back in 2019. Look for them to accomplish this feat again in 2021 with a narrow home victory over Pittsburgh.